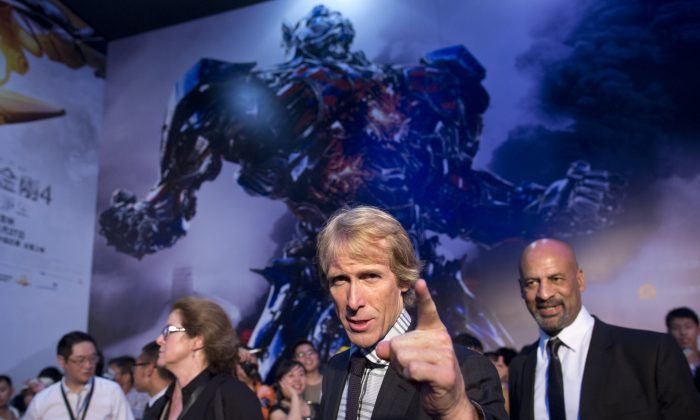 In this Monday June 23, 2014 photo, director Michael Bay, center, gestures to fans as he attends the premiere of movie "Transformers: Age of Extinction" at a theatre in Beijing, China. The fourth installment of the Michael Bay-directed franchise has gone all-out to woo China’s audience with Chinese locations, talent and even a reality TV show. “Transformers: Age of Extinction” illustrates the delicate balancing game of Hollywood studios trying to work out what the Chinese market wants while simultaneously catering to Americans. (AP Photo/Alexander F. Yuan)
Life & Tradition

Will there be a Transformers 5?

Everything is up in the air at the moment after long-time director Michael Bay say he would hand over the series to a new director.

“There’s kind of a new chapter, a new direction in movies I want to make,” Bay said to USA Today.

“I have a lot of stories to tell. And it’s about flexing new muscles.”

However, in another interview with MTV, Bay said that “there’s a lot that’s unexplored, but that’s for the next director to figure out.”

Bay added: “they’re hard movies to do and it takes every day for two years.

The most recent installment, Transformers: Age of Extinction is currently the fourth highest grossing movie of 2014, according to The Numbers.

So far, no director or cast has been marked to take over the reins from Michael Bay or actors Mark Wahlberg, Stanley Tucci, and Nicola Peltz.

Schwarzenegger unveiled the portrait at a ceremony in the state Capitol in which he made a rare appearance in Sacramento nearly four years after he left office.

The oversized portrait of a youthful Schwarzenegger, which will eventually hang on the third floor, was painted by Austrian artist Gottfried Helnwein, a realist who previously illustrated Andy Warhol and John F. Kennedy.

Schwarzenegger, a movie star before he ran for governor in the chaotic recall election of 2003, said he owes all his successes in life to California, which he called a mythical place “where nothing is impossible.” As a boy growing up in Austria, he dreamed about the state, he said.

“I dreamt about California every day, and I knew that one day I would have to come here to this beautiful state if I wanted to make my dreams a reality,” he said.

Schwarzenegger said that while he always dreamed big, he never envisioned his portrait hanging in the state Capitol, joking “I might have envisioned a sculpture on Muscle Beach.”

Two of Schwarzenegger’s five children attended the unveiling, Christopher, 16, and Patrick, 20, which also included political notables including at least three former speakers of the state Assembly, Willie Brown, Bob Hertzberg and Fabian Nunez. He also posed for photos with former staff and lawmakers and hugged 28-year-old John Masterson, who has Down syndrome and worked in the governor’s mailroom.

Singer Jerry Garcia “had a wonderful quote saying, ‘You don’t want to be the best of the best. You want to be the only one that does what you do,’ ” Newsom said. “And it’s a way to describe Arnold Schwarzenegger.”

“I thought it was very dignified. It actually looked like a photograph to me,” he said.

True to his outsized life, Schwarzenegger’s portrait is larger than those of other modern-day governors, roughly half a foot wider and a foot taller than his predecessor, according to the Department of General Services. The former governor paid for the portrait himself at an undisclosed cost.

The seminar highlighted the state’s aggressive efforts to tackle issues such as reducing carbon emissions.

“While the politicians in Washington can’t get anything done because of being stuck in these ideological foxholes, we here in California have two governors from two different parties, together in the same room fighting for the same green energy future,” Schwarzenegger said at the summit.

Organizers are using the state’s policies to prompt further action ahead of United Nations climate-change conferences in Peru and Paris.

“To get AB32 through the California legislature, that is heavy lifting, and I don’t think anyone should underestimate that. I’m not sure any other governor might have done this,” he said at the symposium.

Schwarzenegger said that California leaders of all political stripes have chosen to address climate change because not doing so will cost much more in the long run in things such as state infrastructure at risk of failure because of flooding, increased heat- and pollution-related deaths, and a never-ending wildfire season that stretches state budgets.

As governor, Schwarzenegger promised to bring fiscal accountability, but the state faced a huge budget deficit when he left office. In one of his final acts in office, Schwarzenegger commuted the involuntary-manslaughter sentence of the son of Nunez, a former political ally.

Months after Schwarzenegger left office, embarrassing revelations emerged about an affair he had with his maid that resulted in a son born out of wedlock. The disclosure devastated his marriage to Maria Shriver, and the two are separated.