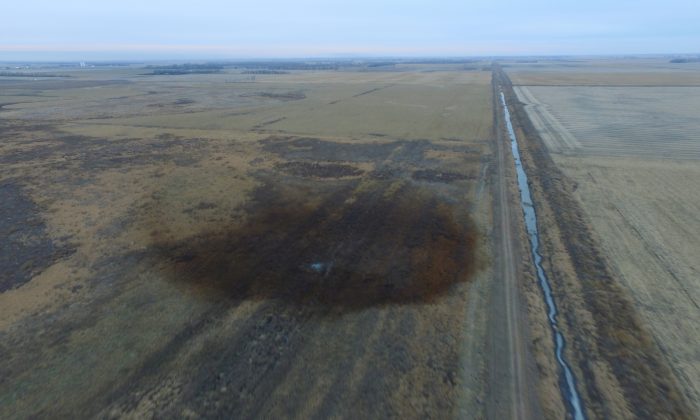 An aerial view shows the darkened ground of an oil spill which shut down the Keystone pipeline between Canada and the United States, located in an agricultural area near Amherst, South Dakota. (Reuters/Dronebase)
US News

TransCanada Corp said on Friday, Nov. 25, it has recovered 44,400 gallons, or 1,057 barrels, of oil from the Keystone pipeline spill site at Amherst, South Dakota.

The company had shut down its 590,000 barrel-per-day Keystone pipeline, which links Alberta’s oil sands to U.S. refineries, on Nov. 16 after a 5,000-barrel spill.

Within 15 minutes, the pipeline was shutdown following emergency response procedures after a drop in pressure from the leak was detected south of a pump station in Marshall County.

TransCanada has not yet set an expected restart date for the pipeline, which is one of Canada’s main crude export pipelines.

“We expect it to take several weeks. Our focus is making sure they do that clean-up in accordance with our regulations,” said Brian Walsh, environmental scientist manager for the South Dakota Department of Environment and Natural Resources.

The Calgary-based company said that additional excavation will be conducted beyond Sunday for soil remediation purposes, adding it has about 170 personnel round-the-clock on the site engaged in clean-up activities.

Preliminary inspections of the damaged section of the Keystone pipeline will be completed on site by both TransCanada and U.S. Pipeline and Hazardous Materials Safety Administration (PHMSA) staff, then sent to Washington, D.C., for an investigation by the National Transportation Safety Board’s Metallurgical Laboratory, the company said.

“As a safety precaution, TransCanada sampled one residential water well yesterday at a location about 1.5 miles from the site to alleviate any concerns — all test results were normal,” TransCanada added.

The Keystone pipeline is part of a 2,687-mile system that also is to include the proposed Keystone XL pipeline, which has faced persistent opposition from environmental groups, American Indian tribes and some landowners.

The Keystone pipeline, which began operations in 2010, transports crude from Alberta, Canada, to refineries in Illinois and Oklahoma, passing through the eastern Dakotas, Nebraska, Kansas and Missouri. TransCanada says on its website that the company has transported more than 1.5 billion barrels of oil–about 63 billion gallons–through the pipeline since 2010.

1) The KEYSTONE Pipeline that Trump approved DID NOT LEAK. The portion that leaked was built under the Obama presidency! Probably Chinese steel! pic.twitter.com/NiVOmUglzR

President Donald Trump issued a federal permit for the Keystone XL pipeline project in March, after which TransCanada Corp dropped a $15 billion lawsuit against the U.S. government. According to legal documents, TransCanada Corp was seeking to recover what it says were costs and damages under the North American Free Trade Agreement (NAFTA). TransCanada Corp’s permit had been rejected by the Obama administration as the section of the pipeline had become a lightning rod of controversy, particularly for environmental concerns.

But President Donald Trump backs it as part of his broad energy strategy, and says it will shore up national security, reduce dependence on oil imports from countries like Mexico and Venezuela, lower fuel prices, and bring jobs.

While the 875-miles of proposed Keystone XL pipeline continues to attracted international attention–having been made a symbol of their broader fight against fossil fuels and global warming–12,000 miles of oil transmission pipelines were quietly approved and built under the Obama administration from 2010-2014, reported the Financial Post.