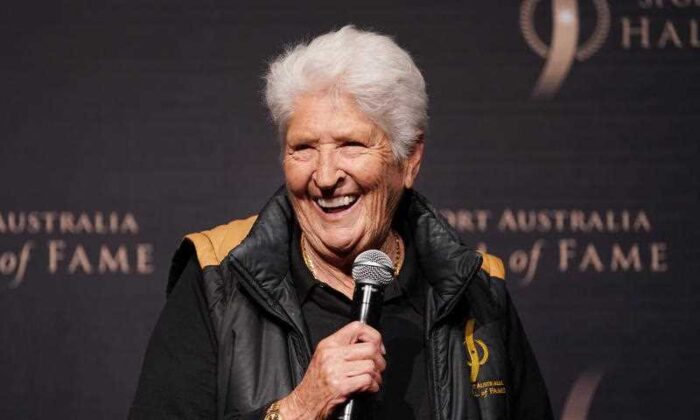 Trans Athletes Could ‘Compete Against Each Other’: Aussie Swimming Icon Dawn Fraser

Swimming legend Dawn Fraser has dived into the transgender sporting debate, becoming Australia’s third high-profile female swimmer to speak up on what has turned into a controversial issue amid the 2022 federal election campaign.

Her comment comes after Australia’s most decorated Olympian Emma McKeon and Olympic gold medallist Emily Seebohm this week aired their concerns about the “unfair” advantages of transgender athletes if they are allowed to compete with female athletes.

Fraser, who is a four-time Olympic gold medalist, told the Daily Telegraph on Thursday: “I don’t think it’s fair to have transgender men competing against women.”

“Why don’t transgender people compete against each other,” she asked. “That would solve all the problems?”

On the same day, McKeon, a four-time world record holder and winner of 11 Olympic medals revealed she “personally wouldn’t want to be racing against someone who is biologically a male.”

“It’s not a new thing, but it’s new in the fact that sports will, [and] swimming, have to deal with it. Individual sports are going to have to work out how to handle it.”

But transgender footballer Hannah Mouncey, who was barred from playing AFLW for not meeting the requirements for trans athletes, argued that McKeon “is just dealing with the incorrect information she has been given.”

“I used to be able to bench press 150 kilograms but that went down to 50 kilograms within 12 months, that’s the effect of the loss of testosterone,” Mouncey added.

However, former Deputy Prime Minister Michael McCormack on Thursday said he believed the debate should be about “fairness” and “biology.”

“For those people putting poisoned pen to paper, [what] if your slightly-built late-teenage daughter is lining up playing sport against some ex-butch bloke who is getting an advantage because they now identify as a woman?” he said.

“If you went out into the homes and sports venues right around Australia there would be many more people in Katherine Deves and Emma McKeon’s corner than the other side.”

Meanwhile, Australian Sports Commission CEO Kieran Perkins, who is also a dual Olympic swimming gold medallist, revealed the trans debate was “not the highest priority” on his organisation’s agenda. Instead, he noted that women’s safety and participation in sport, as well as their involvement in professional coaching and administration, are the issues the team is focusing on.

The current guidelines for trans athletes “allow for inclusion and fairness to be appropriately managed by sports,” he added.

In February, Australian Prime Minister Scott Morrison backed the “Save Women’s Sport Bill” by Tasmanian Senator Claire Chandler, which would give women and girls the right to play single-sex sports by making it legal to ask a male competitor not to play in the female category.

Chandler, a women’s sports advocacy, said it is “unacceptable” that the current Commonwealth laws threaten sports clubs and associations with legal action if they exclude males from women’s sports.

“I support it, I think it is a terrific bill and I’ve given her great encouragement,” Morrison told reporters. “Claire is a champion for women’s sports and I think she has been right to raise these issues in the way that she has.”