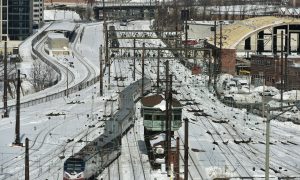 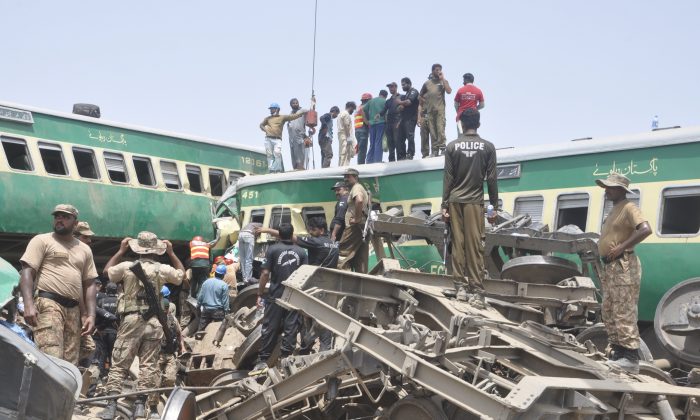 MULTAN, Pakistan—A passenger train rammed into a freight train at a railway station in southern Pakistan on Thursday, killing at least 20 people and injuring 74 others under overturned carriages, hospital officials said.

The Akbar Express, heading to the western city of Quetta from Lahore, crashed into the freight train in the Sadiqabad area of Punjab province’s southern Rahim Yar Khan district, destroying five carriages and trapping passengers.

Pakistani officials and volunteers work at the site of a train crash site in Rahim Yar Khan, Pakistan, Thursday, July 11. A passenger train rammed into a freight train in southern Pakistan earlier in the day, killing an undetermined number of people and injuring many others. pic.twitter.com/TL5r0zDGei

Twenty people were killed in the train crash and 74 were wounded, with some in critical condition, according to Javed Ahmed, a physician treating the wounded.

Rescue workers freed the wounded by cutting through the twisted metal of the carriages and dozens were taken to hospital, police said.

Prime Minister Imran Khan ordered authorities to provide the best possible medical care to the victims and said he was saddened by the news.

The Prime Minister issued a statement of condolence in which he blamed the infrastructure of Pakistan’s colonial-era railway network which has fallen into disrepair due to chronic under-investment and poor maintenance.

Saddened to learn of train accident in Sadiqabad. My condolences to the victims families and prayers for the speedy recovery of the injured. Have asked Railways Minister to take emergency steps to counter decades of neglect of railway infrastructure & ensure safety standards.

Train accidents in Pakistan are often the result of poor railway infrastructure and official negligence.

Last month, six people were killed when a freight train collided with a passenger train in Hyderabad 165 km (100 miles) from Karachi.

The cause of Thursday’s crash is under investigation but Railways Minister Sheikh Rasheed Ahmed said human error was believed to be responsible.

“I have ordered an inquiry. Investigations will complete in two-three days,” he told Geo Television.

The minister also announced compensation for the dead and injured.