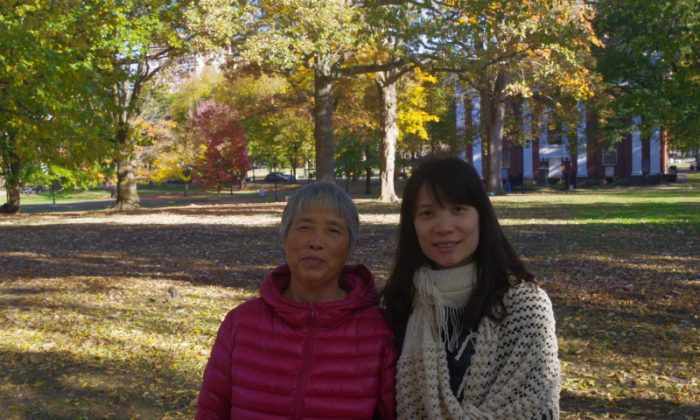 Not given a change to defend herself, a 66-year-old woman was told to plead guilty by a public prosecutor at the Xuhui District Court in Shanghai, China on January 22. The trial was adjourned in just 20 minutes. The defendant insisted she was innocent.

It was the second trial for the defendant, Huang Qiaoqin after being arrested on November 25, 2013 for distributing fliers on the street about the Falun Gong, according to Minghui, an overseas website that carries information about the practice, which involves five sets of slow-motion exercises and an adherence to teachings based on principles of truthfulness, compassion, and tolerance.

The Chinese regime has been suppressing Falun Gong practitioners since former Chinese Communist Party leader Jiang Zemin declared his personal crusade against the practice in July 1999.

Without Huang’s attorney giving any defense or statement, the public prosecutor directly asked Huang if she pleads “guilty.” Huang insisted that she was innocent, Yin said.

“The public prosecutor then shouted out loud, with a very bad attitude. He repeatedly asked her if she pleads guilty. My mom just said that she didn’t commit any crime,” Yin said.

“The judge then said, ‘If so, the trial can not be continued,'” Yin said.

The whole trial only lasted 20 minutes before the judge adjourned. The next trial would be held on February 2, NTD reported.

For refusing to renounce their belief in Falun Gong, hundreds of thousands of Chinese citizens have been arrested, illegally detained, subjected to brainwashing, and sentenced to prison. More than 3,000 practitioners have been persecuted to death, according to Minghui, which closely tracks the persecution.

Minghui gathered incomplete statistics showing that in 2014 at least 91 Falun Gong practitioners died due to torture, 6415 were detained without trial, and 983 were tried and sentenced for their beliefs.

Researchers have also gathered extensive evidence that several military and public hospitals in China have been systematically harvesting the organs of Falun Gong practitioners for transplantation. Tens of thousands of practitioners are estimated to have lost their lives for their organs, which are sold for a profit.