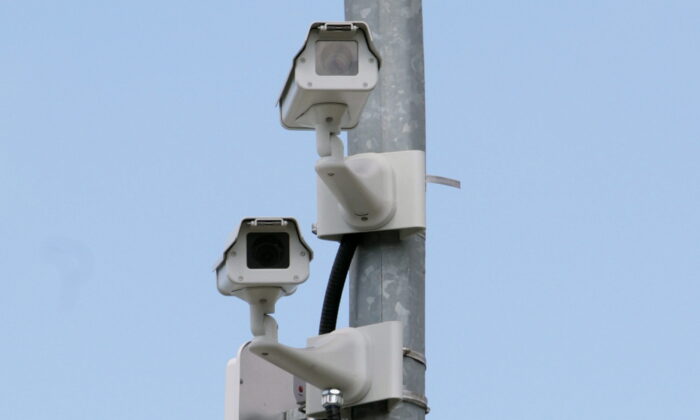 The installation of video cameras at over half the intersections in Richmond, B.C., is raising concerns around surveillance and whether the data could fall into the hands of foreign state agents given that the footage can be purchased by the public.

“The main concern is the loss of privacy, of course, and the selling of data, personal data, without monitoring, oversight, or control,” policy analyst and immigration lawyer Richard Kurland told The Epoch Times.

“[Another] is that, why is it needed to that extent? …  You have more cameras per capita in Richmond than anywhere else in Canada.”

Richmond announced in April that it had installed traffic cameras, known as closed-circuit TV cameras, at 110 intersections aiming to make roads safer, noting that “steps have been taken to ensure privacy is maintained.”

Mayor Malcolm Brodie said at the time that it was an important initiative that would “positively impact road users in Richmond.”

“By providing the city more accurate data, traffic planning to increase safety and potentially mitigate vehicle congestion will increase,” Brodie said. “The cameras will also enhance community safety as camera footage will be available for up to 30 days, to assist in vehicle-related incidents.”

Kurland points out, however, that there isn’t a high collision rate in Richmond. According to data published by the Insurance Corporation of British Columbia, Richmond has seen its number of reported crashes cut by nearly half in the past five years, including a significant drop from 16,231 in 2019 to 9,795 in 2020.

“The idea is that these systems have been put in places where there are high levels and a trend of car crashes, but the data don’t support that. In fact, the number of incidents has plummeted over the last couple of years in Richmond, so it’s not because of a traffic problem,” Kurland says.

Regarding privacy, Meghan McDermott, a staff lawyer with the B.C. Civil Liberties Association, told Richmond News in March 2020 that various court decisions have shown that people are allowed a certain level of anonymity even while in public, although the issue of privacy in a public place is not clear-cut.

She warned that if the video cameras don’t blur out faces and licence plates, the footage could be used for malicious purposes or general state surveillance.

Kurland says the newly installed cameras are not the same as a photo radar system, which snaps a photo if someone runs a red light. “This is very different. This is not one photo—it’s continuous mass surveillance.”

Kim Decker, a corporate communications officer for the city, said in an email that the city has worked closely with B.C.’s Office of the Information and Privacy Commissioner (OIPC) on the project and is in compliance with regulations to “not collect video footage of a sufficient resolution quality to identify facial or licence plate data.”

Decker also said the traffic cameras will not be used for generic surveillance or observation.

In a 7–1 vote in May, however, Richmond city council adopted a motion to seek approval from the solicitor general, premier, and local MLAs to allow the newly installed traffic cameras to record better quality footage that could help in police investigations if needed. The cameras had earlier been installed following strict OIPC guidelines that they blur out faces and licence plates. In its vote in May, “council supported challenging the privacy commissioner’s ruling,” Richmond News reported.

According to the city’s April news release, the public and businesses can buy the video footage “to assist in legal or other matters such as evidence of collisions.” The cost will be $375, and the buyer must specify the location, date, and time related to the vehicle in question, as Decker said the city will only release footage that involves some type of collision.

Kurland says there’s nothing to prevent Richmond from selling the data to a proxy, which may in turn sell it to a foreign government. This presents risks for human rights activists, particularly if their data falls into the hands of a regime such as the Chinese Communist Party, he said.

He said unless people push back, they could easily lose their privacy rights.