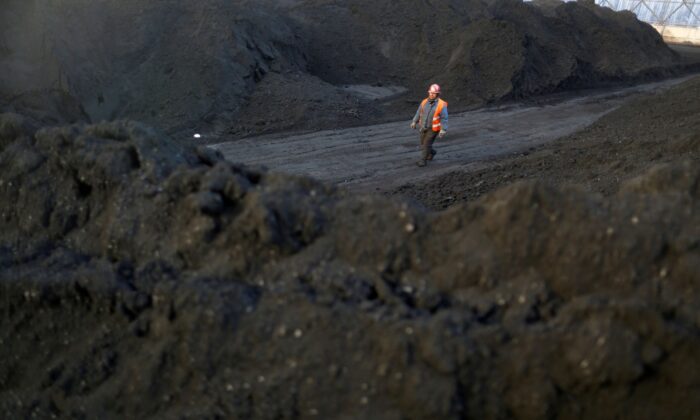 BEIJING/SINGAPORE—Chinese coal traders are selling at a loss or trying to delay imports after Beijing’s market interventions triggered a 50 percent price drop that saddled them with unprofitable supplies, according to several market participants.

Domestic thermal coal futures have halved over the past three weeks after the government ordered top mining companies to slash prices, set a target, and raise output immediately to curb prices that had nearly quadrupled this year.

The consequence of the Chinese regime’s intervention is that imports are likely to slow in November and December after already easing in October.

Amid the price free-fall, importers have tried to quickly sell the coal shipments they booked in October when prices were at record highs, taking losses of between $40 to $100 per tonne, said three China-based coal traders.

Some buyers walked away from contracts, forfeiting their deposits estimated at about 10 percent of the cargo’s value, which prompted some traders to raise deposit requirements this week to up to half the shipment value, said a Singapore-based trader with a Chinese company.

Other buyers are trying to delay incoming shipments in the hope that they can sell their current supplies later if prices rebound.

“You don’t have much choice. Either swallow the losses for the cargoes that already arrived, or re-negotiate with upstream suppliers and postpone loadings of future shipments,” said one of the China-based traders, who works with a state-run utility selling shipments onto smaller traders and other end-users.

Delaying shipments could lead to cuts of 10–30 percent in November imports compared to the recent average, according to estimates by two of the traders.

China, the world’s top coal consumer and producer, imports roughly one-tenth of its coal needs, bringing in a monthly average of 20 million to 30 million tonnes, mostly from Indonesia, Russia, and South Africa.

As China’s coal futures steadied around $141 per tonne this week, physical spot transactions at top Chinese ports slowed after a panicky spell last week which traders described as a “stampede.”

“Sellers were stepping on each other’s toes to dispose of their cargoes, even at a loss of more than $50 a tonne,” a Singapore-based trader said last week.

“No one is caring about coal prices now. Their priority is to find a home for the pricey cargo before it becomes more worthless.”

Chinese importers were paying over $160 a tonne on a free-on-board basis for Indonesian thermal coal with a heating value of 3,800 kilocalories in late October; but that has slipped to $100 a tonne for November and $88 for December.

Chinese coal prices found some support this week after the National Development and Reform Commission, the country’s top economic planner, signaled last week it may slow its interventions after prices tumbled during the 10 prior trading days.

“With so much uncertainty still hanging, we don’t know when the prices will return to the right track, no matter what level it is,” said a Beijing-based trader.

By Muyu Xu and Chen Aizhu