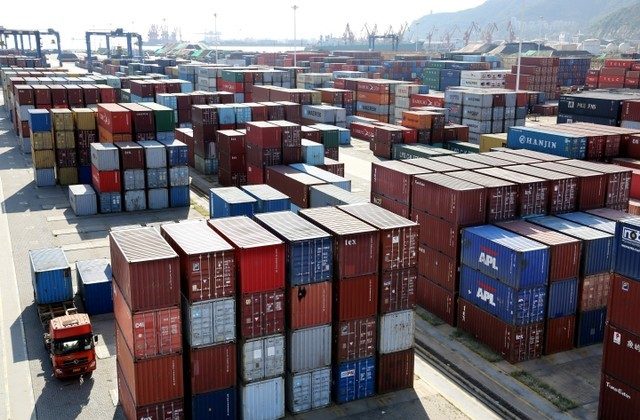 BEIJING—At week’s end, global investors and policy makers will likely be given a stark reminder of the costs of a bitter Sino-U.S. trade war, with a Reuters poll predicting that China’s third-quarter growth will slow to its weakest pace since the global financial crisis.

Beijing has been trying to ward off a sharper slowdown in the world’s second-largest economy by stepping up policy support and softening its stance on a de-risking campaign, as the full impact of higher U.S. trade tariffs has still to be felt.

And analysts said more support measures will be needed as risks to China’s growth outlook have increased since the second half of the year.

A poll of 68 economists showed gross domestic product likely grew 6.6 percent in July-September from a year earlier, slowing from the previous quarter’s 6.7 percent and hitting the weakest pace since the first quarter of 2009.

The predicted third-quarter growth would still be higher than the government’s full-year target of around 6.5 percent.

“The downward pressure on the economy is relatively big as consumption weakens and infrastructure investment has yet to stabilize” from a slowdown, said Tang Jianwei, senior economist at Bank of Communications in Shanghai.

Recent economic data have pointed to weakening domestic demand ranging from infrastructure investment to consumer spending, as a multi-year crackdown on riskier lending and debt has pushed up companies’ borrowing costs.

Growth in China’s vast factory sector in September stalled after 15 months of expansion, with export orders falling the most in more than two years, according to private survey showed. An official survey also confirmed that manufacturers were coming under stress.

There are signs that firms have ramped up shipments before broader and stiffer U.S. tariffs take effect, which likely explains an unexpected acceleration in China’s exports growth in September and a record trade surplus with the United States.

The yuan has lost about 6 percent against the dollar this year, which may also have taken the sting out of the U.S. tariffs, but could fan risks of capital outflows.

Export-reliant Chinese cities and provinces are already showing the strain. Guangdong, China’s biggest province by gross domestic product, reported a drop in exports in the first eight months from a year earlier.

The world’s two biggest economies last slapped tit-for-tat tariffs on each other’s goods on Sept. 24, with Washington levying duties on about $200 billion of Chinese goods. Trump has threatened to impose tariffs on virtually all of China’s goods exports to the United States.

Policymakers have in recent months unveiled measures to lower financing costs, cut taxes and fast-track more infrastructure projects, although analysts believe such modest stimulus may take time to put a floor under the slowing economy.

The People’s Bank of China (PBOC) has cut reserve requirements for lenders four times this year, with the latest cut taking effect on Oct. 15, injecting more liquidity to stimulate bank lending. But the central bank faces obstacles in funneling more credit to cash-strapped small businesses, which are vital for boosting economic growth and creating jobs.

Economists in the poll estimated GDP grew 1.6 percent quarter-on-quarter, versus 1.8 percent in the second quarter.