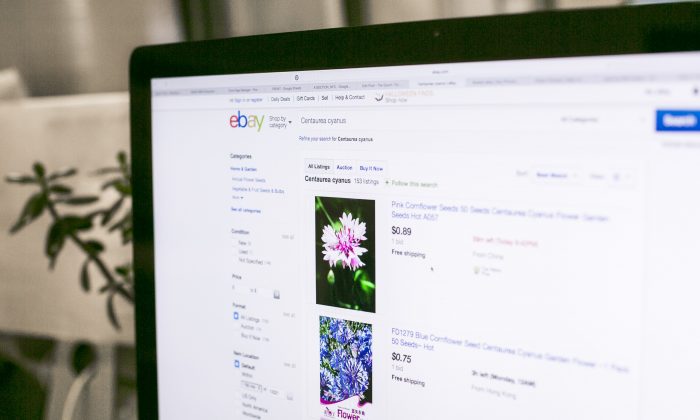 The emergence of the Internet as a marketplace has erased many of the old barriers of trade, bringing with it new problems along with prosperity. While many insidious activities operate in the penumbra of the Web, such as drug markets that can only be accessed on the Dark Web, other harmful trades occur out in the open, on websites like eBay.

Using a custom-designed software program, Swiss researchers at ETH Zurich tracked two-thirds of the global sale of flowers on eBay and nine other online markets over 50 days to study the flow of invasive plant species across borders. Their research was motivated by the introduction of goldenrod, Himalayan balsam, and Chinese windmill palms to Switzerland, which have threatened the native plant-life.

They found that of the 2,625 different plant species that were for sale on eBay, 510 were invasive in at least one region of the world, and 35 rank on the top 100 most invasive list, as compiled by the International Union for the Conservation of Nature.

The most commonly offered invasive species was passionfruit, put up for sale by dealers from 17 countries, followed by Centaurea cyanus, which could be purchased from dealers in 10 countries. The list of species documented by the researchers is not exhaustive, as new species were turning up every day during their survey.

What makes trade across the Internet especially dangerous is that regions that had previously engaged in little plant trading, such as South Africa, can enter the global exchange because of the low barriers to entry.

“We have no idea whether the plants that are being put on the global market from [South Africa] will prove to be invasive species,” Christoph Kueffer, the lead researcher of the project, said in a statement.

Disruption of ecosystems by invasive species, both plants and animals, costs the United States $122 billion annually, according to a 2013 Congressional Research report; around half of that is attributed to the disturbance of agriculture and livestock. For example, the leafy splurge—native to Europe and North Asia—costs the North Dakota economy more than $100 million annually in loss of cattle forage; the aquatic Hydrilla cost $860 million in Florida in damage to agriculture, flood control, and lowered property values.

Online marketplaces like eBay facilitate not only the trade of invasive flora, but also goods that are illegal even under international law. The large number of individual sellers makes regulation difficult, which in turn breeds the sale of contraband.

In April, conservationist Ted Williams was able to easily find ivory trinkets for sale on eBay. The company tries to ban the sale of contraband through keyword filters, but that can easily be bypassed. Smugglers will use a modified term like “fauxivory” or a euphemism like “ox bone,” Williams writes in the Yale Environmental Digest.

Unlike drugs, there’s no large-scale, top-down “war” on a variety of contraband, which is why sellers are willing to put up offers on publicly accessible sites like eBay. The U.S. Fish and Wildlife Service doesn’t even have a cybercrime unit, and laws against the transport of invasive species are governed by a patchwork of state and local laws rather than a federal mandate.

Enforcement efforts have mostly been spearheaded by volunteers, who lack the resources to curtail the growth of contraband trade. According to the International Fund for Animal Welfare, the number of ads for parts taken from endangered wildlife grew by 266 percent between 2008 and 2014.