Trade Deal No Panacea for Rocky US Relations With China 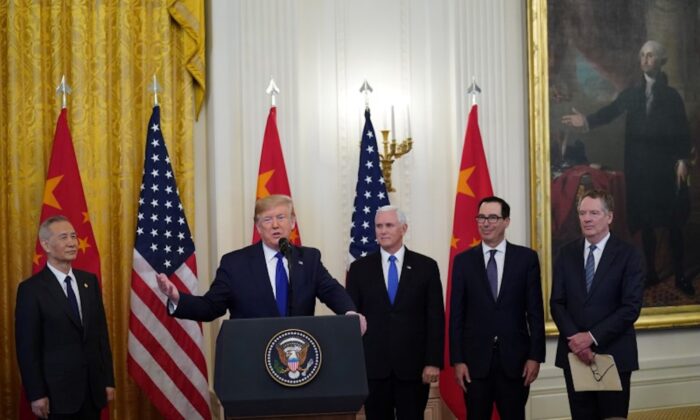 WASHINGTON/BEIJING—From Huawei to the South China Sea, deep political rifts between Beijing and Washington are set to persist, despite a trade relations breakthrough, as the United States pushes back against an increasingly powerful and assertive China.

“The broader, darkening picture is not going to be brightened much by this deal,” Bates Gill, an expert on Chinese security policy at Macquarie University in Sydney, said of the initial trade deal signed on Jan. 15.

This backdrop spans China’s militarization of the South China Sea; rising tensions over Taiwan, which Beijing claims as its own; U.S. criticism over human rights in Hong Kong and Xinjiang; and a backlash against telecoms gear provider Huawei.

While the initial deal defuses an 18-month row, experts say it is unlikely to provide much balm for broader frictions rooted in U.S. fears over an economically and technologically powerful China with a modernizing military.

“We can see Phase 1 as an emergency treatment to lower the temperature, but it has not addressed the fundamental problems,” Wang Heng, a professor at the University of New South Wales in Sydney who studies the China-U.S. economic relationship, said.

Washington is increasingly alarmed about the security implications of Chinese technology, and has tightened its rules to keep better tabs on acquisition of key technology by China, setting in motion changes to the global supply chain.

“The Chinese leadership are not naive about this,” said Gill. “They are already making moves to be more autonomous and thinking about a future … in an environment of hostility.”

The Trump administration put Chinese telecoms equipment giant Huawei Technologies on a trade blacklist on national security concerns in May, banning it from buying supplies from American firms without U.S. government approval.

It has also taken measures to crimp exports of artificial intelligence software.

The two countries are also at odds over Taiwan, which counts the United States as its biggest weapons supplier but which China sees as one of its provinces.

Taiwan’s President Tsai Ing-wen was re-elected on Saturday, vowing not to submit to Chinese pressure or control.

Tsai’s campaign was helped by seven months of pro-democracy protests in Hong Kong, which Beijing accuses Washington of helping to foment, eroding China’s case for a “one country, two-systems model” similar to Hong Kong’s for Taiwan.

U.S. Army Secretary Ryan McCarthy said last week that China “will emerge as America’s strategic threat” and that the United States planned to deploy two task forces to the Pacific over the next two years capable of information, electronic, cyber and missile operations against Beijing.

Treasury Secretary Steven Mnuchin told CNBC on Wednesday that the United States was concerned about other issues involving China but these should be dealt with separately.

“You have to negotiate different pieces at different times.”

By Andrea Shalal and Cate Cadell