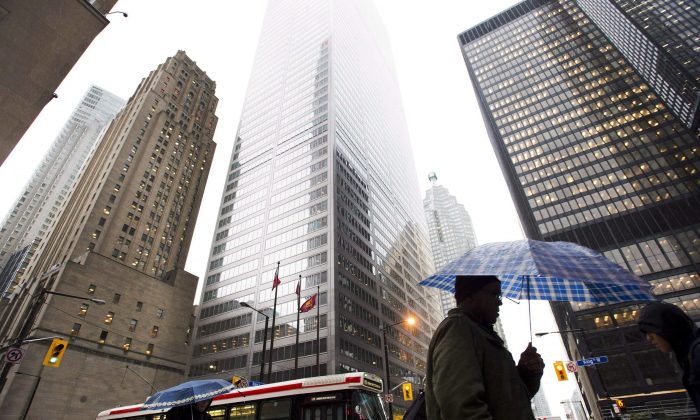 A view of Toronto’s financial district, home of the big Canadian banks, which should be able to expand internationally with greater ease due to the TPP. (The Canadian Press/Nathan Denette)
Business & Economy

Canada’s financial services sector has a lot to gain from the landmark Trans-Pacific Partnership (TPP) deal whose negotiations concluded on Oct. 5.

There is no doubt or controversy about it, unlike with the agriculture or auto industries. Reducing trade barriers, gaining access to new markets, and establishing fair and transparent rules is a big boost to the banking and insurance industries.

Canadian financial institutions have gained in strength relative to their international peers since the financial crisis and are well positioned to grow even more internationally with additional help from the TPP. Last year, the World Economic Forum ranked Canada’s banking system as the soundest in the world for the seventh straight year.

One thing notable about the TPP as a trade agreement is the focus on services and e-commerce, and not simply the traditional subjects of tariffs on hard goods. In a way, this is a “modern-day” trade agreement, which should suit Canada’s service-oriented economy well.

According to the federal government, the services industry makes up about 70 percent of Canada’s economy with financial services being its largest component.

“It’s been a long time coming,” Leah Littlepage of the Canadian Life and Health Insurance Association (CLHIA) told Epoch Times. For the CLHIA’s members, gaining market access to the Asia-Pacific region is of great interest for its high growth potential.

“It’s basically about levelling the playing field,” said Hendrik Brakel of the Canadian Chamber of Commerce.

A level playing field means many things, including limiting the favouring of domestic financial service suppliers (namely state-owned enterprises), increasing the transparency of foreign regulations to better help Canadian companies conduct business, and having protections against expropriations and a greater ability to repatriate funds.

Of course, the details of the agreement are still to be released, after which further analysis can be done. Based on what’s available now, “Canada’s well-capitalized banks are in a strong position to support the expanded economic activity arising from freer trade,” according to a short press release from the Canadian Bankers Association.

While foreign competitors pose a serious threat for some Canadian industries, the financial services industry—especially the banks—won’t fret.

“Our banking system is already quite open so we’re not terribly concerned about increased competition because, frankly, it’s already there,” said Brakel. “If HSBC or Citi want to aggressively compete for Canadian businesses, they can.”

Competition is not a concern that has been raised by insurance companies to the CLHIA either.

But the Canadian market is mature and growth for the big banks can come from international expansion. This, of course, has already taken place, with Scotiabank having the largest presence among the Canadian banks in Latin America, while TD and RBC have made notable inroads into the U.S., and BMO is active in Asia.

The TPP also specifically addresses electronic commerce and the free flow of data between TPP countries, something crucial for the banking and insurance industries. Again, it’s a question catching up with the reality of today’s increasingly digital economy.

A lot of countries have requirements that a company must store data on its customers domestically. Those are artificial rules, explains Brakel. In this era of the Internet and cloud storage, the data can be accessed from anywhere.

“[TPP] prevents governments in countries from requiring the use of local servers for data storage,” said Brakel.

Canadian financial institutions including small and medium-sized enterprises have equipment and servers set up in Canada and shouldn’t have to build a server farm in, say, Malaysia, to sell their services.

“So that’s a huge cost that hopefully they won’t have to incur because of TPP,” Brakel said.

Both Brakel and Littlepage feel the TPP is a win for Canada’s financial services sector.

“Based on the available information, I would say that our negotiating team should be applauded. We certainly seem to have gotten a good deal,” said Littlepage.

It has taken five years of negotiations to reach this stage. The 12 TPP nations, which include the U.S. but not China, will need to ratify this deal and then implement it. Canada’s financial services sector would prefer it happen sooner rather than later.