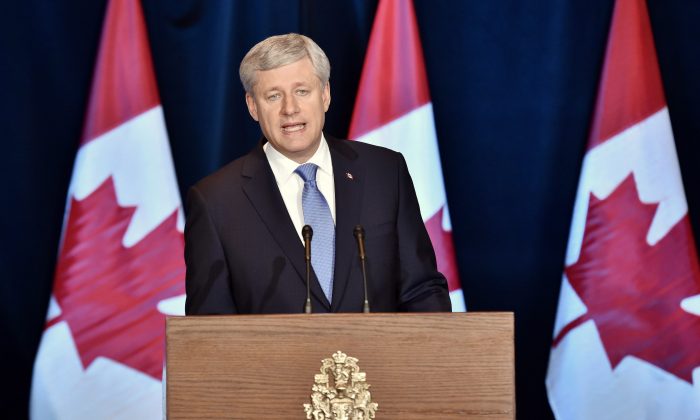 Prime Minister Stephen Harper speaks about the Trans-Pacific Partnership trade deal at a press conference in Ottawa on Oct. 5, 2015. Twelve nations, including Canada, have reached a tentative deal on the TPP, a massive Pacific Rim trading bloc billed by Harper as the largest-ever deal of its kind. (The Canadian Press/Nathan Denette)
Canada

TPP: A Unique Moment in Canadian History Unfolds in Atlanta

ATLANTA—In the delicate dance of presenting a major free-trade agreement in the heat of an election campaign, the civil service was determined that it—not politicians—take the lead in describing the deal to Canadians.

The promotional materials released this week to proclaim the new Trans-Pacific Partnership were edited by functionaries and scrubbed of any hint of partisanship from a government seeking re-election.

Different sources confirmed some bits were taken out. One noted that the government usually presents trade deals with a little more pizzazz than this week’s press release titled: “Government of Canada Delivers New Programs For Supply-Management Sector.”

“We almost had two hands tied behind our back,” a political source explained.

“We couldn’t have said, ‘Under the leadership of the prime minister…’ We couldn’t say how many free-trade deals we’ve had… No rhetoric, no hyperbole.”

It was a strange week.

A unique moment in Canadian history unfolded in Atlanta, where a government two weeks from an election completed negotiations for the largest trade zone in history.

The scene featured watchful civil servants; winking-and-nudging from provincial delegations; a lobby crammed with lobbyists; and hordes of indefatigable Japanese journalists who staked out a staircase day and night, occasionally catching a wink of sleep in one of the hallway chairs.

In retrospect, the enormous pizza delivery was an ominous sign.

The downstairs lobby of a hotel-and-convention complex was abuzz with anticipation of a scheduled news conference to announce the agreement on the afternoon of Sunday, Oct. 4.

The city hosting the trade talks seemed unaware of history unfolding in its midst.

But a dozen pizza boxes were going the wrong way: upstairs. A woman carried them into an elevator toward the 14th floor where negotiators were addressing last-minute irritants.

The news conference was delayed two hours. Then another two, and two more. Finally, it was called off.

A staffer walked into the briefing room and announced: “It’s not going to start for a very long time.”

The Canadian team started getting nervous. Certainty of a deal slowly morphed into doubt.

At home in Ottawa, Prime Minister Stephen Harper was kept abreast of developments. His staff had mapped out a dozen different scenarios for different places and times he might make a speech on the deal. He wound up doing it Monday morning in Canada’s capital.

The city hosting the trade talks seemed unaware of history unfolding in its midst.

Echoing the confusion of different locals, a group of tourists from St. Louis said they’d never heard of this TPP. They wondered why there were easily six-dozen Japanese journalists milling about their hotel. Their confusion was understandable: only a few American media covered the talks.

Upstairs in the negotiating rooms, women were closing the deal for Canada.

Chief negotiator Kirsten Hillman; her two deputies; the No. 1 official in both the trade and agriculture departments; and the top two staffers in Trade Minister Ed Fast’s office became nicknamed the “all-female” negotiating team.

One woman outside the Canadian delegation marvelled at the amount of time they’d spent on this, away from their loved ones through multiple rounds of negotiations that stretched around the clock for days on end.

The deal wrapped up just after 4 a.m. Monday.

Hillman rested a bit, then returned to brief the media a little over three hours later. The Manitoba-educated Montreal lawyer had spent years working for the feds on trade.

But the pressure on this one was unique.

She was lobbied at least 131 times in the last year. The array of issues was staggering, according to federal records. Sometimes it was industries with competing demands—big pharma wanted this, generic drug-makers wanted that. Canola. Aeronoutics software. And more livestock interests than Noah’s Ark: chickens, pigs, cows, turkeys—she met with their representatives repeatedly.

“If you’ve devoted years to doing this and been very careful along the way, chances are hopefully everybody’s going to say this is the deal, they’re happy with this deal…

“That’s the sort of blood, sweat, and tears that has to go into getting there.”

The Americans pressed her to pick up the pace. In Washington, they fumed for months that they hadn’t had one decent conversation about access for their dairy farmers to Canada’s grocery shelves.

The numbers only took shape recently. Finally, just before midnight Sunday night, dairy lobbyists went rushing up the hotel staircase to hear the final details. It wound up being 3.25 percent market access—less than one-third of the original American request.

An official in the Bush administration explained the American strategy going in.

Timothy Keeler was the top staffer in the U.S. trade office in 2008, when it first explored joining the TPP process. Canada wasn’t involved yet. But a potential role for Canadian dairy was already envisioned: that of shock-absorber.

He said the U.S. needed Canada and Japan to take in a bit more dairy, so that when U.S. producers lost some domestic market share to New Zealanders they might recover some sales abroad.

“We weren’t sitting there saying, ‘OK, if we get Canada in we need to get X percentage of market opening,”‘ Keeler said.

“We were thinking, at the time, eventually you could get Canada and Japan in there—and that should provide the opportunity to get some ‘gets’ for the U.S. dairy industry.”

The world of Canadian dairy went to Atlanta to limit those “gets.”

One Quebec industry representative sitting by the lobby in Starbucks summarized his zero-tolerance approach to negotiation. When asked what percentage might be acceptable, he said: “We’re sure it’ll be too much.”

Media coverage back home presented the travel of provincial delegations to Atlanta as a confrontation with the feds, and some politicians eagerly fed that impression.

But the relationship was more complex.

Provincial cabinet ministers met regularly with Fast. The provincial and federal teams ate together. One provincial official said someone from the federal side even printed up a news story illustrating how miffed the provinces were—to distribute it in Atlanta.

“They used it, for sure (in the negotiations on dairy),” he said.

For all the long-distance federal-provincial shouting they were, mostly—as one provincial politician said with a wink—on the same team.