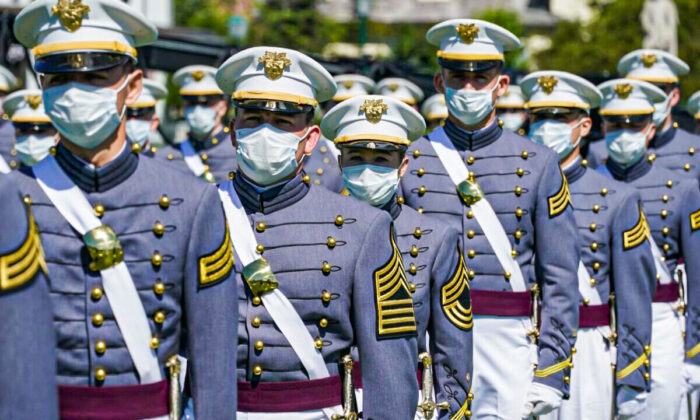 Visiting Australian Senator Andrew Hastie says basic struggles with identifying gender are undermining the ability of the United States to lead the developed world in opposing military aggression from Beijing.

“These tensions are tearing at the fabric of our democracies, many among us are no longer confident of truth, tradition, and our democratic values,” Hastie, a former Special Air Service operative, told the Hudson Institute on Sept. 15.

The now-opposition defence minister pointed to research by Prof. James Kurth, of Swathmore College, who said the real culture clash was not between the “West and the rest” but within the West itself.

The professor predicted in his article that there would be a lack of consensus on basic issues like humanity, justice, and within politics.

In turn, Hastie said this conflict was no longer just playing out in universities but in the mainstream.

“Toxins are in the mainstream now, seeping through the media, entertainment, in our schools, and our families. It has brought disruption and political consequences for the Western body politic. It makes it harder for our leaders and policymakers to deal with the strategic challenges,” the senator said.

Hastie said smaller nations could not set into play grand strategies and could only follow bigger countries like the United States.

“If we look up from the cultural chaos at home, we see China encroaching on Taiwan and Russia on Eastern Europe.”

An example of the ongoing debate regarding gender identity is recent orders within the U.S. Pacific Air Forces for leaders to stop using gender, age, or race pronouns in written format, claiming such a move would improve “lethality.”

“We must embrace, promote and unleash the potential of diversity and inclusion,” according to an email sent out in May to commanders in Guam, a U.S. territory just hours away from the South China Sea.

Cronin took aim at Australian media for focusing too much on issues like capability gaps, money wastage, “alienating options” for dealing with China, and mischaracterising the deal as one where Australia was becoming an “adjunct to the U.S. Navy.”

“While there is some validity to these points … it completely misses the fact that America is taking a big gamble on Australia. We’re not talking about just any technology transfer … we’re talking not just about nuclear propulsion, but about technology writ large,” he said.

“Are we going to get ahead of it? Are we going to harness it? At the university level, or governments and militaries? Or are we not going to do that, we’re going to cede that ground?”

While Clark said AUKUS institutionalised several decades-long arrangements between Australia, the UK, and U.S., particularly “in the area of undersea warfare.”

“Sometimes it misses the fact that this is something that’s been going on for a while now, and we’ve actually taken it and codified it in a way that’s going to allow us to get a lot more benefit for the next decade.”

Hastie also said he was telling school kids to get ready to be involved in AUKUS over the “next 20 years” across a range of areas, including quantum technology, artificial intelligence, and hypersonics.

AUKUS was formed to counteract ongoing military aggression from Beijing in the South China Sea and towards Taiwan. The deal could potentially shift the power balance in the Indo-Pacific substantially and give the United States a strong anchor (Australia) in the region.