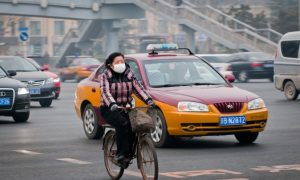 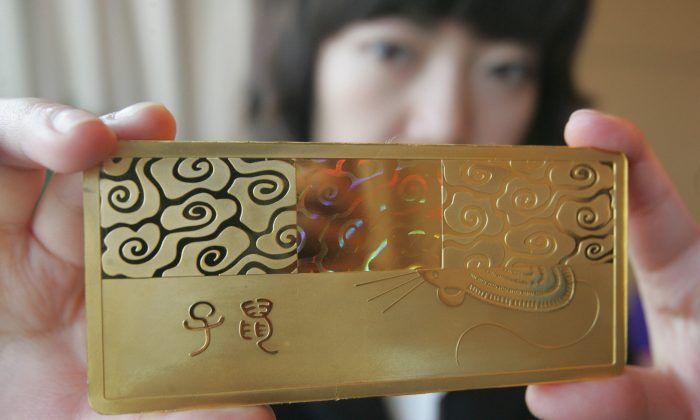 A Chinese staff shows off a gold bullion with a design of the rat in Beijing 17 December 2007. (STR/AFP/Getty Images)
China

Toxic Cyanide Pollution From Extracting Gold Is Widespread in China

After two devastating chemical explosions in the city of Tianjin on Aug. 12, Chinese authorities revealed the presence of about 700 tons of sodium cyanide at the site. Some of it is thought to have spilled into the surrounding environment, causing angry responses and questions. Many wanted to know what such large quantities of toxic material are used for. Wang Yang, the editor of Tencent Weibo’s Daily in Touch channel, attempted to answer the question. The following article is an abridged treatment based on his post of Aug. 15.

Cyanide is a well-known, highly toxic chemical. A tiny amount can kill a person. But few people know that it is used in huge quantities in modern gold mining. Almost all gold producers depend on it to separate gold from other ores. Cyanide is also an essential reactant in jewelry plating.

China is the world’s largest producer of gold. The enormous amount of cyanide used in gold mining in China is shocking. China Gold News once ran a detailed report about a gold production company in Inner Mongolia.

It indicated that the company mined 23.1 million tons of ore in 2014, producing 5.1 tons of gold. To support its production capacity, the company consumed over 2,000 tons of sodium cyanide each month, which is equivalent to approximately 4.7 tons of sodium cyanide for every 10 kg (22 pounds) of gold. Taking into account the many smaller gold mining companies and the jewelry industry, China’s annual consumption of cyanide is shocking.

Modern industry has developed a sophisticated procedure for cyanide degradation. China, too, is aware of the technology. One way is to effect degradation during the earlier phase of separating gold from the other ores, and then achieve natural degradation by exposing the depleted tailings to the sun at the end of the process. Isolation and anti-infiltration measures are essential. The natural degradation process of cyanide is fast. With good contingency plans, and by isolating people, animals and important water sources, it is possible to prevent catastrophic consequences.

But without strict environmental protection measures, toxic leaks may cause ecological disasters. In June 2013, China Economic published a report titled “Shaanxi Maanqiao Tailing Warehouse Approved for Licensing Despite Multitude of Potential Dangers.” The article stated at the beginning that Shaanxi Maanqiao Ecological Mining Ltd. has produced 12,000 tons of gold each year, while the tailings have caused pollution and safety problems. Villagers said there was sediment in their well water and people dared not drink it, for fear of cyanide poisoning. In addition, the protective plastic liners in the tailings warehouses were damaged; so how could it achieve anti-infiltration, the article questioned.

Another famous case involves Zijin Mining. As early as the end of 2006, a dam collapsed at its Shuyindong Gold Mine in Guizhou Province. About 200,000 cubic meters (261, 590 cubic yards) of waste potassium cyanide leaked out of the tailing warehouse, threatening two freshwater reservoirs downstream.

You could say that registered businesses still follow certain management procedures and are concerned about rules and regulations. But illegally run mining companies are a mess across China; even death cases have been reported.

An article titled “Properties and Safe Disposal Methods of Yunan Cyanide Waste” was published in the industry journal Yunnan Metallurgical in June 2015. The article stated that nearly 10 tons of cyanide tailings were left by private and illegal miners in a county in east Yunnan Province without any protective measures. The waste was scattered across excavation sites in the woods, some of them located in local government’s secondary water protection areas. These waste piles contained toxic materials and posed a big threat to nature as well as people.

The jewelry electroplating industry also uses cyanide. Small workshops that are not licensed to purchase cyanide get it from the black market. In many cases, heavily contaminated wastewater is directly released into the environment.

Yiwu City in Zhejiang Province has many jewelry electroplating businesses and a serious cyanide pollution problem. In 2013, a safety supervisor in Chi’an Township of Yiwu City noticed a heavily polluted small river in town. He also discovered a large black resale market for cyanide.

Although the rate of cyanide degradation is fairly fast, continuous release of large amounts of cyanide does cause damage.

Punishment for illegal discharge of cyanide is not nearly as severe in China as it is in the U.K. and the United States.

For example, on the website of China’s Ministry of Environmental Protection one can access the “Environmental Impact Report Approval for Heilongjiang Baoshan Mining Ltd. Gold Resources Development Project.” Right in the beginning it states: “The environmental impact assessment filed for the project was not approved by the ministry. Unauthorized construction was begun in violation of relevant provisions in the Environmental Impact Assessment Law. The illegal acts have been investigated and punished. The company must learn lessons, improve awareness of the laws and prevent violations from happening again.”

It seems, the punishment was nothing more than a light slap on the wrist.