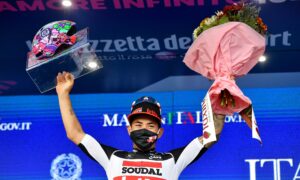 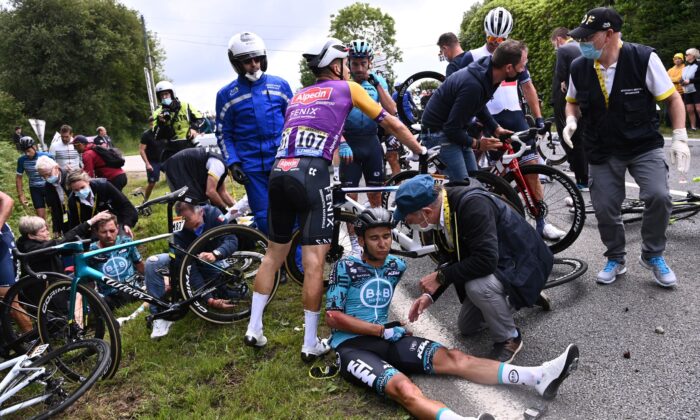 France—The Tour de France has withdrawn a lawsuit against a spectator who caused a massive pile-up during the first stage of the race in northwest French region of Brittany but French police continue to investigate the incident.

Local prosecutor Camille Miansoni told a news conference on Thursday that the probe was still ongoing as a second complaint remains.

He also said that people injured in the crash could also file lawsuits later.

The spectator, a 30-year-old Frenchwoman, has been arrested and placed into custody on Wednesday after presenting herself at a police station in Brittany.

She is accused of involuntarily causing injury and putting the life of others at risk and faces up to 1 to 2 years in jail depending on seriousness of injuries.

The spectator was holding a cardboard sign and facing away from the cyclists at a television camera as they passed. German Tony Martin was sent tumbling when he rode straight into the sign, and a large number of other riders also fell to the ground.

Miansoni said the woman had no police or justice records and expressed fear and shame after what she said was an “idiocy”.

Police also called for the spectator not to be lynched on social networks.

“We are withdrawing our complaint. This story has been blown out of proportion but we wish to remind everyone of the safety rules on the race,” Tour director Christian Prudhomme told Reuters.

“If you come to the Tour, you hold your kid, you hold your pet and don’t cross the road carelessly. And above all, you respect the riders—they’re the ones worthy of live TV.”

On Tuesday, Tour de France riders bringing the race to a halt for about a minute one kilometer into its fourth stage in a silent protest for safer racing conditions after numerous crashes.