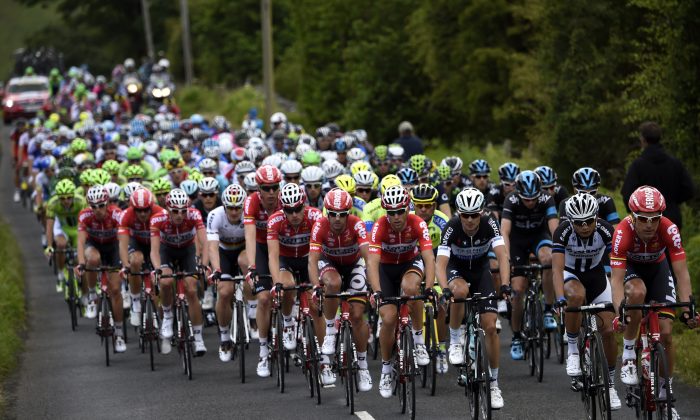 The pack rides during the 190.5 km first stage of the 101st edition of the Tour de France cycling race on July 5, 2014 between Leeds and Harrogate, northern England. The 2014 Tour de France gets underway on July 5 in the streets of Leeds and ends on July 27 down the Champs-Elysees in Paris. (ERIC FEFERBERG/AFP/Getty Images)
Cycling

The annual, multi-stage bicycle race is considered to be the most prestigious of cycling’s three-week-long Grand Tours. The other two races are the Giro d’Italia and the Vuelta a España.

This year, the 101st edition of “Le Tour” will start on Saturday, July 5 in Leeds, United Kingdom, and end on Sunday, July 27, Paris Champs-Élysées, France. Other than the UK, the tour will pass through Belgium and Spain.

Live stream is available on ITV Player and NBCSN.

Check out the schedule below. All distances are in kilometers.

LEEDS, England (AP) — So your national team is out of the World Cup in Brazil, Wimbledon doesn’t seem the same without Serena Williams or Rafael Nadal and your baseball team is slumping.

This weekend, fans of many stripes could join die-hard cycling buffs and tune in to the start of the 101st Tour de France for that much needed sports fix.

Cycling’s big event gets going Saturday through bucolic countryside in northern England, where officials have paid for the right to host it, hoping to draw tourists, capture media attention and feed the recent cycling craze among Britons.

It could first require getting over a nagging belief that, after Lance Armstrong’s doping exposure, the sport may still be dogged by drugs cheats. Cycling chiefs and experts generally agree that the era of widespread doping is over, but few would claim to know that today’s pack is fully clean. Drugs testers will conduct hundreds of blood and urine checks during the race.

Bookmakers’ odds foresee a victory either by defending champion Chris Froome, a 29-year-old Kenyan-born Briton who leads Team Sky, or two-time champ Alberto Contador — a 31-year-old Spaniard with Tinkoff-Saxo Bank — to take home the yellow jersey when the race finishes on Paris’ Champs-Elysees on July 26.

Few of the 198 riders on the 22 teams stand a realistic chance of winning, based on recent performances, skill sets and team priorities. Most are “domestiques” who race above all to help their team leaders win. Vincenzo Nibali of Italy, plus Spaniards Alejandro Valverde and Joaquin Rodriguez, stand an outside chance.

Conceding home-road advantage, Contador said Friday that “local hero” Froome remains the favorite. The Briton, who succeeded Sky teammate and compatriot Bradley Wiggins as Tour winner, said: “I don’t think many Tour champions get to come back as defending champions and can start in front of their home crowd.”

Five of the 21 stages end in summit finishes, which usually promise drama as the cream of the climbers rises to the top first. In all, the riders will cover 3,664 kilometers (2,277 miles) of roads in England, France, Belgium and Spain.

Aside from cobblestone treachery in Stage 5, the mountains mostly matter this year. For the first time in 61 years, this Tour has only one long time trial — a race-against-the-clock, where racers set off one-by-one down a starter’s ramp. It comes in Stage 20. Contador and Froome are among the best in both climbing and time-trialing.

This year marks the second time that the Tour de France is starting in Britain, after a successful time in London in 2007. Local officials use municipal funds to pay for the right to host the race in their cities, hoping for short-term tourism revenues plus a longer-term return from the international media spotlight.

The Tour’s route changes every year. After three stages in England, this 101st edition enters France on Tuesday. The riders will cover many of the same roads their forebears covered since the race was first run in 1903. Among novelties this year: the first-ever Chinese rider in the race, Cheng Ji, and 11 climbs in the eastern Vosges mountains — though long, steep ascents await in the Alps and Pyrenees too.

If turnout on English roads during the 2007 Tour de France is any precedent — when millions lined up two- to three-people deep to watch the pack zip by — expect big crowds again this year.

Saturday’s 190.5-kilometer (118-mile) rolling Stage 1 from Leeds to Harrogate is likely to favor sprinters. The Tour’s green jersey goes to the best overall sprinter, one of many subplots to the overall title chase which includes pure climbers seeking the polka-dot jersey to be the best man in the mountains.

Many of the Union Jack-waving spectators will want Britain’s Mark Cavendish, perhaps the best sprinter of his generation, to get his 26th career Tour stage victory in Harrogate, his mother’s hometown. If he does, he’ll wear the race leader’s yellow jersey for the first time in his career — a coveted honor.

Kate, the Duchess of Cornwall, will do the honors in bestowing the prized shirt at the awards ceremony on Saturday, joining her husband Prince William and Prince Harry for a royal welcome for the French Republic’s best-known annual sporting event.