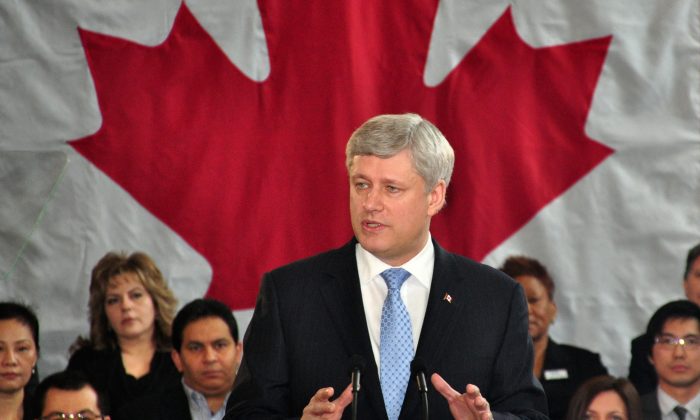 Prime Minister Stephen Harper outlines new legislation to be tabled next week during an event in Toronto on Wednesday, March 4, 2015. The new legislation would remove parole for some crimes. (Allen Zhou/Epoch Times)
Canada

TORONTO—Prime Minister Stephen Harper announced a new bill Wednesday to deny parole to certain criminals, but the stiffer penalties could face a constitutional challenge because the only way left to get out of jail would be with the approval of the public safety minister.

The new law will apply to those convicted of first-degree murder involving: the killing of police officers or correctional officers; terrorism; kidnapping or sexual assault; and crimes “of a particularly brutal nature.” It would also apply to those who commit high treason.

“Next week, our government will introduce legislation to ensure that for the most heinous offenders and the most horrific crimes a life sentence in Canada will henceforth mean exactly that—a sentence for life,” Harper announced in front of a crowd that included families of murder victims.

Currently, those who are convicted of first-degree murder face an automatic sentence of life in prison with no chance of parole for 25 years.

Harper said that in order to address constitutional concerns, under the new law, some killers serving life without parole will be permitted to petition the minister for public safety for release after serving no less than 35 years.

“This is not parole,” Harper said. “Unlike parole, decisions will not rest with an appointed board but with the federal cabinet, men and women fully accountable to their fellow citizens and to the families of the victims of these crimes.”

But University of Montreal law professor Paul Daly said that route would not satisfy section seven of the Charter of Rights and Freedoms, which states that people cannot be deprived of their liberty “except in accordance with the principles of fundamental justice.”

“The principles of fundamental justice include a decision by an independent and impartial tribunal. The minister is political, and arguably you need the parole board and some independent body to make a decision about parole,” said Daly.

Daly said the issue has not been definitively decided by the courts, but he expects there would be litigation based on the argument.

“It’s pretty likely,” he said. “It would be much better if they had a review mechanism in there, either a review by the federal court or by an independent tribunal, like the parole board.”

Given that Harper made a point of the fact the decision would not be in the hands of a parole board and rather with elected officials, it seems unlikely the bill would be changed before becoming law.

By sidestepping parole boards, the new system would free families of victims from having to make victim impact statements and convince boards to keep criminals in prison.

With Harper on March 4 were several families whose loved ones were murdered. They said the legislation would spare others like them the trauma of repeatedly facing their relatives’ killers in parole hearings.

If enacted, the changes would save families “a lifetime of misery, a lifetime of waiting for phone calls to come, emails to come, and preparing yourself mentally and physically for parole hearings,” said Susan Ashley, whose sister, Linda Bright, was abducted, sexually assaulted, and murdered by Donald Armstrong in Kingston, Ont., in 1978.

“You have no idea how much of a toll it takes on a human being.”

The NDP have not spoken to that issue specifically, but the party’s justice critic Françoise Boivin questions whether new legislation is needed to keep these kinds of criminals in prison.

“Most dangerous killers are already denied parole and held for life. We believe in evidence-based policies that actually work. Sentencing reform should be focused on improving public safety, not on scoring political points,” she said in an emailed response.

“Decisions about who is released should be based on the risk an individual poses to the community and how to best protect public safety. We will wait to see exactly what’s tabled by the government, but we would certainly have concerns about the provisions the prime minister outlined.”

The proposed legislation fits into the Harper government’s tough-on-crime agenda as it gears up for an election later this year and follows through on a promise made in the 2013 Speech from the Throne.

The Conservatives have added dozens of mandatory minimum sentences, from drug and gun crimes to sex offences—a move that has come under criticism from the opposition parties and some human rights groups but has satisfied calls from victims’ rights groups for penalties to match the crimes committed.