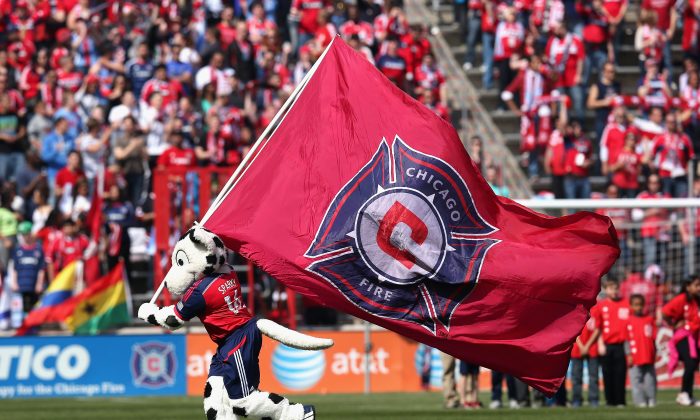 Sparky, the mascot for the Chicago Fire, runs with a flag before an MLS match between the Fire and the New England Revolution at Toyota Park on April19, 2014 in Bridgeview, Illinois. The Fire and the Revolution tied 1-1. (Photo by Jonathan Daniel/Getty Images)
Soccer

Tottenham Hotspur will take on Chicago Fire in a club friendly match on Saturday, July 26.

The game will also air on SuperSport 3 Africa in Botswana, Cameroon, Congo, Ivory Coast, Gabon, and in most African countries, as well as beIN Sports Arabia 11 HD in Egypt, Kuwait, Lebanon, Oman, and in most Middle Eastern countries.

Live stream is available on Watch ESPN and Spurs TV (for subscribers only).

Tottenham are 1/2 to win, while Chicago Fire are 11/2 to win as per OddsChecker.

Spurs will play this match after having drawn 3-3 with the Seattle Sounders, and beating Toronto FC 3-2.

Meanwhile, Chicago Fire are having a tough time in the MLS Eastern Conference this season, being currently eighth out of ten teams after 19 matches.

“The team has to put it behind them,” said coach Frank Yallop.

‘”I’ve said this on record, and I’ll say it again: [Chairman] Andrew [Hauptman] is ready to do anything we need that’s right.

“To get blasted out of the stratosphere with a crazy number? No, but a real solid DP signing is not beyond us at all, and even two.