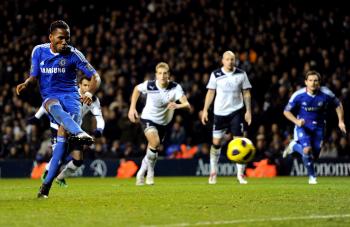 NOT THIS TIME: Chelseas Didier Drogbas penalty is saved in the dying moments of the match by Spurs keeper Gomes. (Mike Hewitt/Getty Images)
Soccer

The Premier League champions’ star striker Didier Drogba came off the bench to score the equalizer, but missed an injury time penalty that would have taken his team back to the top of the table. As it is, Chelsea remains in fourth place, level on points with Manchester United who have two games in hand.

Carlo Ancelotti’s team began well enough and looked the better side for the first quarter of an hour until a Jermaine Defoe pass found Roman Pavlyuchenko, who had more space in the Chelsea penalty area than he had any right to expect.

The Russian was actually running parallel to the Spurs goal but possessed the skill and balance to shoot with power at right-angles between Heurelho Gomes and the Spurs keeper’s right-hand post.

The game proceeded with plenty of ebb and flow and scoring opportunities at both ends. Saloman Kalou was wasteful in front of goal and Pavlyuchenko missed an easier chance than the one he scored. Nicolas Anelka could have tied things up for the visitors but his effort was judged to be offside.

Ancelotti took off John Obi Mikel at half time and introduced Didier Drogba into the fray. On 69 minutes, the Ivory Coast star got the better of Michael Dawson and crashed a fierce shot straight at Gomes.

Although the Brazilian got both hands to it, the drive was simply too hot for him to handle and he could only parry the ball into his own net. One would really expect better from a goalkeeper at the top level.

The sight of Frank Lampard coming on to replace Florent Malouda at the 77-minute mark will have warmed Chelsea hearts. The match seemed to be heading for a draw until, in the first minute of stoppage time, Spurs’ erratic goalkeeper upended fellow Brazilian Ramires in the box and a penalty was rightly awarded.

Gomes is nothing if not unpredictable and he duly atoned for his afternoon’s howlers by diving to his left and brilliantly saving Drogba’s kick to preserve a point for his team.

Ancelotti insisted after the game that, “We deserved to win,” and reporters that “We will win our next game,” according to the Premier League website.  Chelsea fans will certainly be hoping that the manager’s boast is not an idle one.

Bolton Up to Sixth

Bolton Wanderers squeezed out a dramatic 2–1 win over Lancashire neighbor Blackburn Rovers to go sixth in the table.

It was end-to-end action in the first half but neither team could find a goal. Then nine minutes into the second period, came a match-defining moment. Mark Davies received his marching orders for a second bookable offence, and Bolton had to play the remainder of the game a man short.

Yet, against the odds, Bolton took the lead just 11 minutes later thanks to substitute Fabrice Muamba.

Rovers pressed hard for an equalizer and were finally rewarded just three minutes from time when a back header from Jason Roberts found Mame Birem Diouf who calmly slotted the ball home.

Sam Allardyce’s team was still celebrating, and may have dropped their concentration thinking that they were assured of a point. It was not to be.

Bolton pumped the ball long from the kick-off; skipper Kevin Davies was first to it and headed down into the path of American Stuart Holden who spanked a fine low shot past Paul Robinson to take all three points for the Trotters.

Wolverhampton Wanderers came out on top in the second midlands derby of the weekend, with a 1–0 triumph over Birmingham City. Indeed, the margin of victory could have been wider but for another fine display from Blues goalkeeper Ben Foster, who has proven to be a worthy replacement for Joe Hart between the posts.

Wolves did manage to beat Foster once thanks to Stephen Hunt who gave the Birmingham keeper no chance from just a couple of yards out. The Irishman’s strike just before the break turned out to be enough to secure a much needed win for Mick McCarthy’s side, which will enhance their ambitions of avoiding the drop come May.

It was a lackluster performance from Birmingham who barely troubled Wayne Hennessey in the Wolves goal.

“It was a poor performance. If you've seen us in all our games this season you'll see that was out of character but you have to give Wolves credit,” said Birmingham boss Alex McLeish.

Out of character it may have been, but McLeish has to be concerned with his side now only two points above the relegation places.