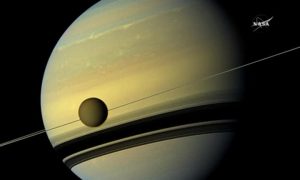 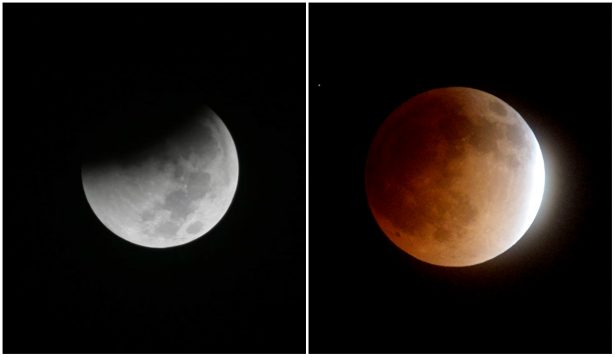 (L) Earth starts to cast its shadow on the moon during a complete lunar eclipse seen from Jakarta, Indonesia on Aug. 28, 2018. (AP Photo/Tatan Syuflana); (R) The moon is seen as it nears a total lunar eclipse on April 15, 2015 in Burbank, Calif. (Kevin Winter/Getty Images)
Science News

NEW YORK/LOS ANGELES—Astronomy buffs across the United States have been promised all the makings of a spectacular total lunar eclipse on Jan. 20, except one—clear skies.

Star gazers from Los Angeles to New York will keep their eyes on the sky for the eclipse, known as a super blood wolf moon, expected to appear at 11:41 p.m. EST.

Although it is a total eclipse, the moon will never go completely dark but rather take on a coppery red glow, called a blood moon. It is also a full moon that is especially close to Earth, called a supermoon.

Check out the Super Blood Wolf Moon tonight! The “wolf” comes from the name for January’s full moon. It’s a “super” moon which means it is closest to earth, and a total lunar eclipse! There may be some passing high (cirrus) clouds out there, but overall decent viewing. pic.twitter.com/67JMkywnkt

And since it appears in January, when wolves howled in hunger outside villages, it has earned the name wolf moon, according to The Farmers Almanac.

But no matter how perfectly the stars align for this stellar event, the thrill or disappointment of the evening really depends on one thing: the weather.

If skies are clear on Sunday night, the spectacular total lunar eclipse will be visible with the naked eye.

Unlike a solar eclipse, which requires eye protection to safely enjoy the view, no extra measures need to be taken for hazard-free lunar eclipse watching.

If cloud cover ruins visibility, there is always a view on the internet.

“Anyone clouded out can go online and see the view from our sky cameras around the world,” said Andrew Fazekas, spokesman for the site AstronomersWithoutBorders.org.

Tomorrow half of the globe will witness a glorious ‘Super Blood Wolf Moon’ total lunar eclipse. Here’s what else is in store for 2019:https://t.co/mQ1hUAHTg2 pic.twitter.com/2SWVC3wBQr

Next chance for Americans to see a total lunar eclipse is 2022.

The blood moon’s red hue is the result of sunlight traveling through the Earth’s dusty, polluted atmosphere, Fazekas said. The shorter, more pliable blue wavelengths of light are scattered outside the Earth’s shadow and the longer, less bendable red wavelengths are refracted toward the moon.

Best viewing of the one-hour total eclipse will be from North and South America, with as many as 2.8 billion people able to see it from the Western Hemisphere, Europe, West Africa and northernmost Russia.

By Barbara Goldberg and Steve Gorman