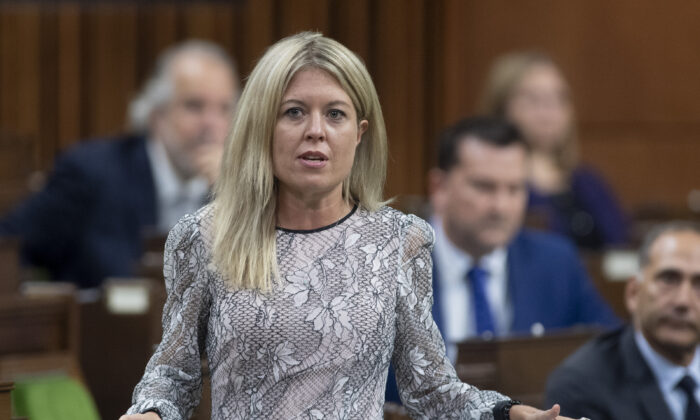 Tory MP Michelle Rempel Garner is joining Brampton Mayor Patrick Brown as the national campaign co-chair for his bid to become the next leader of the Conservative Party.

Brown said the Conservatives are “tired of losing” federal elections to the Liberals. He also released his platform for Western Canada the same day.

“For Western Canadians, the stakes have been high—three election losses to the Liberals have meant massive job losses, unaffordable living, and inequity,” he said.

Brown, who was previously leader of the Ontario PC party and an MPP from 2015 to 2018, and a Conservative MP from 2006 to 2015, said he will “fight for every region of our country to be empowered and unified.”

His plan for Western Canada includes having electoral seat redistribution to be based on representation by population, and changing the current federal equalization program.

“These changes would acknowledge that programs like the Canada Health Transfer and the Canada Social Transfer already provide equitable stable funding for provincial social programs, would ensure all regions are treated equally, and would serve to remove disincentives for provinces to improve their fiscal situations,” the platform said.

Another promise is investment in Western Canada’s fossil fuel sector. Brown pledged to build the country’s oil and gas sector and promote it globally.

“This will ensure Canada can meet the energy security needs of our friends and allies, like the European Union and Ukraine.”

He added that setting caps on greenhouse gas emissions should be the sole jurisdiction of the provincial governments, and Ottawa should play no part in it.

As Ontario PC leader, Brown had supported imposing a carbon tax. The Conservatives dropped their support for a “price on carbon” policy in February after Erin O’Toole was ousted as leader.

Brown’s platform didn’t mention supporting or getting rid of the federal carbon tax.

Rival candidate Pierre Poilievre, who represents the riding of Carleton, said Brown “will say and do anything” to get elected.

In a press conference on March 14, he said Brown’s past support for a carbon tax is contradictory.

“He and I disagree on his carbon tax,” Poilievre said.

“I can’t understand that point of view. Right now, Canadians are paying upwards of $1.70 a litre. Many Canadians feel like they can’t even have the freedom of mobility because it’s too expensive to gas up their vehicles and get where they’re going. … I will get rid of the tax. I will pursue technology not taxes, results and not revenue.”

Poilievre has the highest number of endorsements from Conservative MPs and senators compared to other candidates by a wide margin.