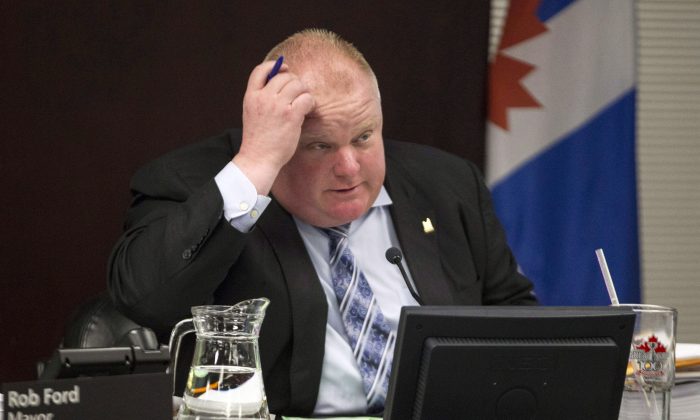 Toronto Mayor Rob Ford attends an executive committee meeting at city hall in Toronto on Tuesday, May 28, 2013. The controversy around an alleged video appearing to show Ford smoking crack cocaine showed no signs of diminishing Wednesday as the leader of Canada's largest city sidestepped questions about a new twist in the scandal. (THE CANADIAN PRESS/Chris Young)
Canada

A report published in the Toronto Star said that telephone and email records belonging to three former aides were ordered deleted. The report did not specify where the alleged order came from.

The newspaper cited anonymous sources, and said one of the people it spoke to expressed concerns that evidence related to the drug controversy could be wiped out.

The Star and the U.S. website Gawker reported earlier this month that Ford was captured on video smoking what appears to be crack cocaine, though the Star itself has said it could not vouch for its authenticity. The mayor has denied the accusation and the clip’s existence.

Ford wouldn’t address the new allegations Wednesday, walking out of a news conference when journalists flooded him with questions.

A spokeswoman for the city issued a statement shortly afterward denying anyone in the mayor’s office requested that records be erased.

“The city has bylaws and policies in place to ensure that city records are not destroyed,” Jackie DeSouza said in the statement.

The mayor parted ways with his chief of staff last week and lost two of his spokesmen this week, and the Star alleges their records are the ones targeted for elimination.

The newspaper has also reported that Ford’s head of logistics, David Price, discussed the possibility of seeking the video with other members of the mayor’s staff. Neither Ford nor Price have addressed those allegations.

Ontario’s privacy commissioner said she sent Ford a letter Wednesday, warning him that “any inappropriate destruction of records has the potential to erode the public’s trust.”

While documents related to personal, political or constituency matters are exempt from municipal freedom of information laws, it can be tricky to determine what falls under those categories, Ann Cavoukian said.

“There’s often grey areas, and so we always say that the premature destruction of records prevents the public and us from making a determination,” she said.

She wouldn’t, however, comment on whether documents linked to the alleged video would be exempt from the regulations.