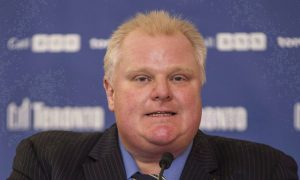 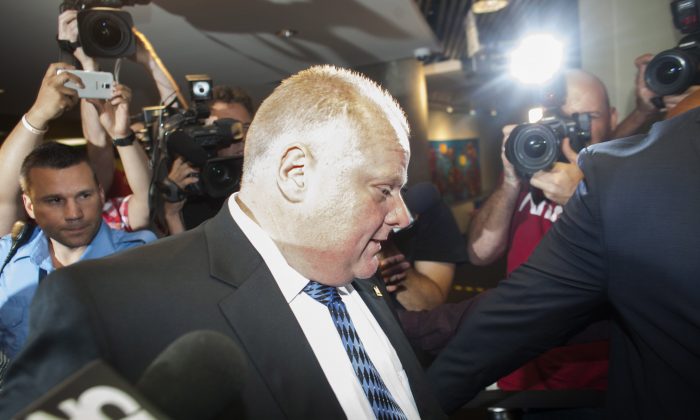 Toronto Mayor Rob Ford leaves his office at city hall on his first day back to work after taking part in a rehab program in Toronto, Canada, June 30, 2014. (Brett Gundlock/Getty Images News)
Canada

OTTAWA—Toronto Mayor Rob Ford could soon wish he was back in rehab or hanging out in Ontario’s picturesque Muskoka region, known for the pricey summer homes that spot the shores of islands and lakes in the area.

Ford’s two-month reprieve from politics ended this week when he returned from drug and alcohol treatment where photographers caught him taking plenty of breaks outside the recovery facility.

Now Ford is back in the race for mayor of Canada’s largest city, a campaign that will see him suffer the slings and arrows of outraged Torontonians who just might overwhelm his diehard supporters.

Ford might have gotten a preview of what’s to come when he took to the streets for a Canada Day parade in east Toronto on Tuesday. A video of one furious and well-built, shirtless jogger confronting the mayor has gone viral.

In footage shot by Global News, the jogger shouted at Ford calling him “a corrupt, lying, racist homophobe.”

The jogger, a local high school teacher named Joe Killoran, has been dubbed the “shirtless jogger,” and called a hero by Ford’s critics.

Ford’s contrite return to political life is off to a bumpy start. He’s faced sharp criticism for refusing to take questions at his first press conference and denying some reporters entry. He used that press conference to apologize for his mistakes and admit that his problems with drugs and alcohol predate his time as mayor.

“I sincerely apologize, not just to the people of Toronto, but every single person who was hurt by my words and my actions. It was never, never my intention to embarrass the city or offend my fellow members of council,” said Ford at the June 30 press conference.

Ford admitted to smoking crack cocaine again shortly before leaving for rehab. The Globe and Mail published a video image of that incident, which prompted the mayor’s two-month departure from the race.

Ford had also offended Torontonians when candid video and audio recordings captured him making racist remarks, speaking in a thick Jamaican accent and rambling incoherently in an intoxicated stupor.

Ford and his brother, who is a Toronto city councilor, are also facing accusations they used their positions in City Hall to help Apollo Health and Beauty Care, a client of the Ford family’s labeling business Deco Labels and Tags.

But it would be too early to rule Ford out of the race. Recent polls suggest he’s held onto the support of Ford Nation, the moniker for his most loyal supporters. Most polls put him in second place behind former federal representative Olivia Chow.

One recent poll by Forum Research gave Chow a 7 percent lead on the mayor (34 percent versus Ford’s 27 percent), but with nearly four months yet to go and (possibly) the worst behind him, Ford still looks to have a chance.

The question now is how far Ford will go to avoid probing questions. The race for mayor of Toronto is notably long; in his first race for mayor, Ford attended hundreds of events and participated in around 100 debates.

Ford could decide to dodge many of those this time around. Calls to his campaign office were answered with a blunt refusal to give any indication where the mayor might turn up.

But as the “shirtless jogger” revealed on Canada Day, ignoring questions will not save the mayor from facing his past. The real question is whether Ford will be able to answer constituents’ questions in a way that will win back some of his previous supporters.