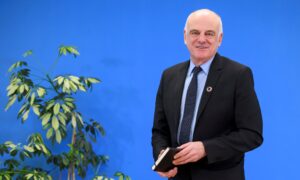 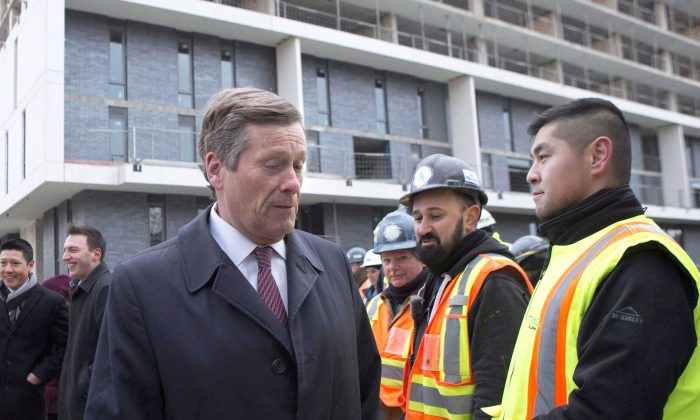 Toronto Mayor John Tory said he is not ruling out adding more public health restrictions in attempts to curb the spread of COVID-19 in the city.

“I can’t say that we are not going to be looking at it. It is our responsibility to look at it because our numbers have been not good as well. The trend line has been in the wrong direction,” Tory told CP24 on Monday.

Toronto reported there have been 504 new cases, 11 hospitalizations, 5 deaths, and 268 recoveries as of 2 p.m. on Sunday.

On Nov. 3, Ontario premier Doug Ford released a new color-coded system framework to implement different levels of COVID-19 restrictions depending on the color assigned to an area.

The idea is areas with the lowest levels of CCP (Chinese Communist Party) virus case counts, positivity rates, and community transmission will be placed in a green category, with the most permissive rules. The system then moves upward through yellow, orange, and red categories, with increasingly strict measures. A grey area indicates a “lockdown” level, where maximum measures would be implemented.

Toronto, which is currently at a modified stage 2, is designated to move to the orange level come Nov. 14, according to Ford.

Areas under an orange zone would allow restaurants to have 50 people dine indoors, but limited to four people per table, and no alcohol to be sold after 9 p.m. Gyms are permitted to have a maximum of 50 people inside the facility at one time.

However, with increasing CCP virus counts, Tory is considering discussing with Ford to implement further measures in Toronto.

“We will recommend and do whatever is responsible to do and whatever is in our power or we will discuss with the province whatever is in their power to make sure people are kept safe,” he said.

‘We’re at a Critical Point’

“We’re at a critical point where we need to change these dynamics,” Roussin said. “I’ve met with the premier this morning to discuss the need for further restrictions, and nothing has been off the table.”

Besides Manitoba, British Columbia has also put in place new restrictions orders to “all individuals, places of work and businesses in the Lower Mainland and the Fraser Valley” to “significantly reduce their level of social interactions and travel.”

“There are to be no social gatherings of any size with anyone other than your immediate household. This includes indoor gatherings of fewer than 50 people, even in controlled settings. So it supersedes our mass gathering order that we have had in place for some time,” said Dr. Bonnie Henry, B.C.’s provincial health officer in a press conference.

“Funerals and weddings may proceed with your immediate household but there are to be no associated receptions, inside or outside your home, or any public or community-based venues,” she added.

‘Lockdown is Not the Solution’

In Alberta, Premier Jason Kenney said that lockdowns are “devastating” and will “inflict untold damage on the economic, social, and mental health of millions of Albertans.”

At a press conference on Monday, Kenney said that a lockdown “constitutes a massive invasion of the exercise of people’s fundamental rights and a massive impact on not only their personal liberties, but their ability to put food on the table, to sustain themselves financially that has huge downstream effects.”

He also made a comparison between the deaths related to COVID-19 and other causes, while not dismissing the seriousness of the CCP virus, which emerged from China last year and causes the COVID-19 disease.

“To date, we’ve lost approximately 340 lives, sadly to COVID-19. In a typical year, 16,000 to 17,000 people pass away in Alberta. And so currently, this represents a tiny proportion of the deaths in our province,” he said.

“Currently, the number of deaths among people over the age of 65 in Alberta, who of course, are those most threatened by COVID-19, is below the five-year average, but the number of deaths for people under the age of 65, who are much less affected by this disease, is significantly above the five-year average. Much of that seems to be due to the significant increase in opioid-related deaths.”

The declaration says the “current lockdown policies are producing devastating effects on short- and long-term public health,” including there being fewer cancer screenings, lower childhood vaccination rates, and deteriorating mental health, all of which will lead to high mortality rates in the years to come.

The trio have asked other medical professionals and the public to also put their name to the declaration in an online petition. As of Nov. 9, a counter on the website shows that over 30,000 medical practitioners, nearly 12,000 public health scientists, and more than 600,000 members of the general public have signed the declaration.