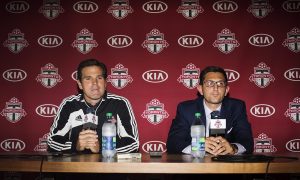 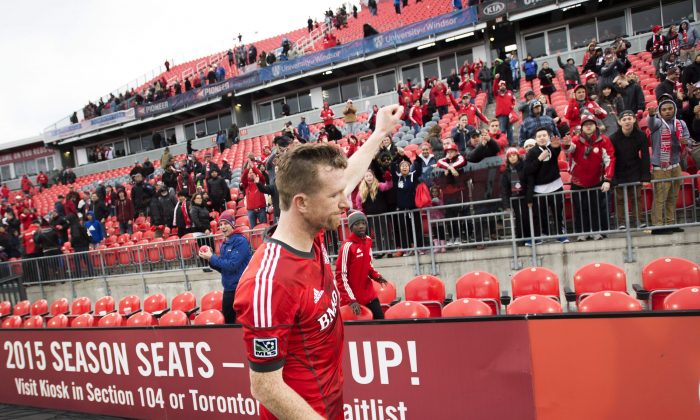 TORONTO—A season of much promise will end without playoffs for Toronto FC after they could only manage a 1–1 draw against their archrival, the Montreal Impact, at BMO Field in Toronto on Saturday.

The final score is deceptive given how many chances both teams had, but when it comes down to it, TFC, once again, did not deliver the goods when they needed to.

TFC needed to win its final two games and hope Columbus lost its final two, but being unable to beat last-place Montreal with their playoff hopes on the line is a story line the Reds are all too familiar with. Toronto FC came into the match on a three-match losing streak when they could least afford it.

“They left it all out there today, they gave it everything they had,” TFC head coach Greg Vanney said about his team.

“The draw today is not good enough in terms of result,” Vanney said.

The match started off with a distinct lack of star quality as Michael Bradley (suspended due to caution accumulation) and Jermain Defoe (injury) were both not dressed; Montreal’s Ignacio Piatti and Justin Mapp were not in the lineup and soon-to-be-retired striker Marco Di Vaio started on the bench.

But the desire to win and play positively was there—from both sides.

Toronto opened the scoring through Warren Creavalle. The former Houston Dynamo defender showed how good his technique can be with a side-footed volley into the far side of the goal in the 20th minute.

But Montreal tied it up in the 39th minute when Felipe slotted the ball well out of Joe Bendik’s reach and into the top corner, after a nice lay off from Andres Romero in an effective counterattack.

In fact, the game could have had more goals, but for some sloppy finishing by strikers Luke Moore of TFC and Jack McInerney of the Impact. Play was pretty open as both teams are not known for air-tight defenses.

“I thought the match was for us to win in the first half,” Vanney said. “We got ahead 1–0 which is what we really asked for. We got caught on a transition and a counter attack.

“It’s frustrating because I thought we were in pretty good control of things up to that point,” Vanney said.

Captain Steven Caldwell called the Impact goal a “sucker punch” and one that was “sloppy” for TFC to give up.

“They wanted to end our playoff hopes,” TFC midfielder Jonathan Osorio said. “To be fair, they played pretty well.”

McInerney continued to struggle in the second half. In the early going, he was put in on goal but hit the crossbar. He also had a glancing header that went just wide.

Toronto almost responded as Gilberto rose above the masses, but his header off a corner went wide.

“Effort is one thing, but finishing games and taking points is what professional sports is about. And we put in the effort, but we didn’t execute well enough,” Vanney said.

TFC threw everything they had in the final 15 minutes and even got the benefit of Montreal’s Heath Pearce being sent off with a straight red card for what didn’t seem like a harsh foul at all on Dominic Oduro.

But in the end, some skirmishes ate up valuable time and card-happy referee Baldomero Toledo dished out two more red cards and two more yellow cards in injury time.

“We had a good opportunity to make the playoffs, we were in a decent position. We let ourselves down in a number of games throughout the season,” Caldwell said.

Vanney wanted his club to learn from this experience. He wanted his players to “take this feeling [of disappointment] in.”