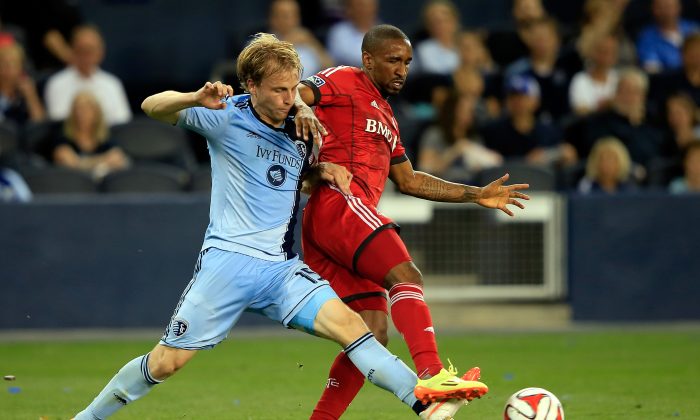 Seth Sinovic #15 of Sporting KC battles Collen Warner #18 of Toronto FC for the ball during the game at Sporting Park on May 23, 2014 in Kansas City, Kansas. (Photo by Jamie Squire/Getty Images)
Soccer

The game will be broadcast on TSN2, RDS 2 in Canada.

The game will also air on MLS Direct Kick and SiriusXM FC in the United States.

Live streaming is available on MLS Live and TSN Go.

This match is crucial for both sides, who are challenging for the top spot in the Eastern Conference.

Sporting KC has a nine point lead over Toronto FC, but the Canadian side have three games in hand and could yet overturn the deficit.

Sporting KC will be missing the services of Peterson Jospeh, ke Opara, and Chance Myers through injury.

TFC coach Ryan Nelsen doesn’t think that Toronto’s chances will be too badly hurt with the former England and Tottenham Hotspur striker out, however because of Gilberto’s current form.

“It shows you that even if Jermain’s not there, we’re still a very attacking team, a very dynamic team going forward,” Nelsen said.

“The guys on the team are cheering [Gilberto] on more than anybody; he’s such a lovely lad, and he works so hard. His teammates are probably more happy than he is.”

“There are things that we have a clear vision on for the future and we act on it. It was important to get it done because we have a lot of games to play and we want to win,” Vermes said.

“And we want to make sure we’ve got the best players as a part of our organization, and that’s what these guys are. That’s why we wanted to get it done as quickly as possible.”