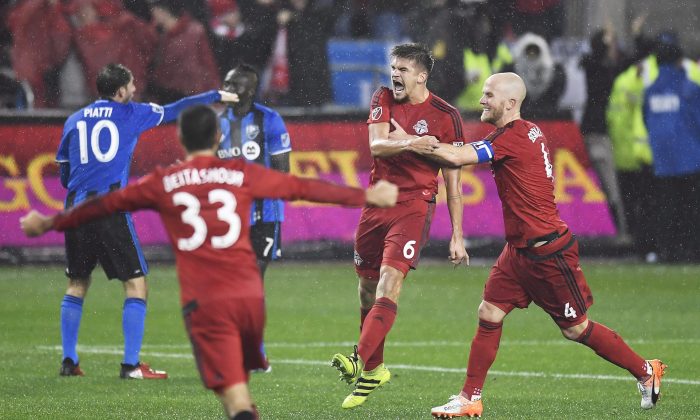 Toronto FC advanced to MLS Cup after an absolutely riveting match in front of a sold-out crowd of 36,000 at BMO Field on Wednesday, Nov. 30. The Reds won the incredible two-match series against the Montreal Impact by an aggregate score of 7–5 after winning in extra time 5–2.

The back-and-forth match went to extra time after TFC led 3–2 after the regulation 90 minutes. Montreal had won the first leg by the same score on Nov. 22 in front of a sold-out crowd of 61,004 at Olympic Stadium in Montreal. In that match, the Impact led 3–0 early in the second half before TFC scored two crucial goals.

At BMO Field, the tide turned in TFC’s favour after Sebastian Giovinco picked up an injury in the first half of extra time and had to leave the game. On came Frenchman Benoit Cheyrou, who scored a minute after entering.

“There were so many twists and turns along the way,” TFC captain Michael Bradley told TSN. “It was a crazy night. I thought we dealt with it in every way.”

In Seattle and Toronto’s only meeting of 2016, the Sounders and TFC drew 1–1 at BMO Field on July 2.