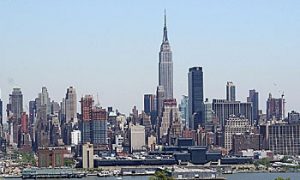 Toronto Digs in for Election

Well, the metaphor depends on the candidate. It could be diving into a much quicker subway, but that subway might not be paid for, or could take 15 years to build, so people might just be getting into their cars and sitting in traffic with their new mayor instead.

It’s an election that only the people of Toronto get to vote in, but it will have reverberations beyond these congested city boundaries. Toronto, like it or not, is the concrete and steel economic gladiator of Canada and the billions of dollars that pour out of here can change the fortunes of the entire country.

Problem is, Toronto is getting old.

Busted sewer lines and water pouring out of mysterious holes in the ground is a common sight. Entire neighbourhoods have had temporary water lines running through them, thick blue pipe snaking along the curb, tying into fire hydrants with patches of asphalt protecting it where people drive over it to get in their driveway.

Every city gets old. Normally though they can be renewed, re-invented, improved, and elevated. But that takes foresight and money, none of which Toronto seems to have. As the city ages, services deteriorate and people get angry—especially when it comes to traffic. People here are quicker to honk at a car idle at a green light than anywhere else in Canada.

Toronto is, as every press release from the city reminds reporters, “Canada’s largest city and sixth largest government, and home to a diverse population of about 2.6 million people.”

It is also home to some of the most disgruntled drivers in the country, and with good reason. The city has a daily shuffle on its major highways where people sit in their cars and watch time disappear. With around 100,000 people moving here every year, the problem just keeps getting worse.

Highway 401 which crosses the city east to west to east is widely acknowledged as the busiest highway in North America. Average speeds during rush hour crawl at a hair-pulling 38 km an hour in some sections, down from 71 km in 2006, according to a study commissioned by the city earlier this year. The Organisation for Economic Co-operation and Development (OECD) estimates the time spent in traffic is costing the economy $3.3 billion a year.

All that waiting wears on people, which is why some might say the successful campaigns in Toronto’s election are those based on criticizing the status quo.

The people here want subways because they know they are fast and reliable. But subways take decades to build, according to Jim Mars, a professor emeritus at the Ryerson School of Urban and Regional Planning.