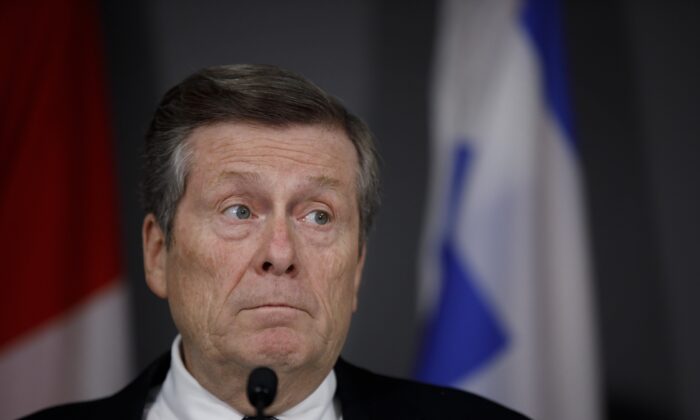 Toronto city council has unanimously voted in support of a motion proposed by Mayor John Tory to provide $100,000 for a legal challenge against Quebec’s secularism law, Bill 21.

A statement from the council said the move reaffirmed the city’s opposition to the bill, which prohibits public servants in positions of authority from wearing religious symbols while at work.

“City Council also called on all other Canadian municipalities to affirm their opposition to Bill 21 and provide financial contributions to support the legal challenge,” said a statement from the city on Dec. 16.

The move comes after Tory announced on Twitter earlier the same day that he will request the council “help fund the legal fight.”

Tory was adding his voice to an initiative from Brampton city council, which voted Dec. 15 to contribute $100,000 to a legal challenge from three organizations opposing the Quebec law, and encouraged other cities to donate.

The joint legal challenge is led by the National Council of Canadian Muslims, the World Sikh Organization of Canada, and the Canadian Civil Liberties Association.

“Just got off the phone with Mayor Patrick Brown from Brampton and I agree with him that Bill 21 is something that needs to be challenged,” she said.

“Together with him, we are issuing a challenge to other municipalities in this country, asking us to contribute toward the legal challenge to get rid of Bill 21.”

In a tweet on the same day, Jyoti said Gian-Carlo Carra, councillor of Ward 9 in Calgary, will submit an “urgent motion” to the city council on Dec. 20, proposing a contribution to the legal fees.

Brown had issued a letter to the mayors of Canada’s 100 most populous cities on Dec. 15, urging them to “make a financial contribution to help fight Bill 21 in the courts.”

His call came after a Quebec elementary school teacher Fatemeh Anvari was removed last week from her class at Chelsea Elementary School for wearing a hijab. She was reassigned by the Western Quebec School Board to an “alternate role” involving a literacy project for the school on “inclusion and awareness of diversity.”

Quebec Premier Francois Legault defended Bill 21, saying it is reasonable and balanced. In a press conference on Dec. 10, Legault told reporters that the school board should have respected the bill, which has been in place since June 2019, before hiring a teacher who wears a hijab.