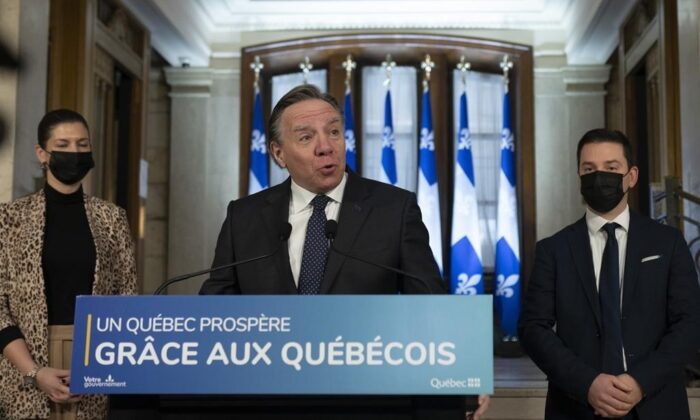 Quebec Premier Francois Legault speaks at a news conference marking the end of the fall session, December 10, 2021 at his office in Quebec City. (The Canadian Press/Jacques Boissinot)
Canada

Quebec Board Wrong to Hire Teacher Who Wore Hijab Given Secularism Law: Legault

MONTREAL—Premier Francois Legault says a school board in western Quebec should not have hired a teacher who wore a hijab.

Legault told reporters today in Quebec City the province’s secularism law, known as Bill 21, has been in place since June 2019 and the Western Quebec School Board should have respected it when hiring.

It emerged this week that a Grade 3 teacher at Chelsea Elementary School, just north of Gatineau, Que., had recently been reassigned to duties outside the classroom because she wore a hijab.

Bill 21 prohibits the wearing of religious symbols such as hijabs, kippas and turbans by teachers and other government employees deemed to be in positions of authority.

The teacher was moved into a different job, a literacy project that will focus on inclusion and awareness of diversity.

Certain provisions in the secularism law are subject to legal challenges, but courts have ruled it must be applied in the interim.

For his part, Legault defended Quebec’s secularism law as reasonable and balanced.