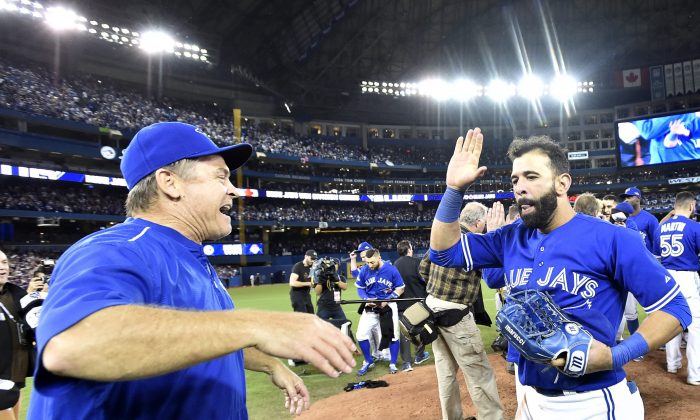 Jose Bautista and John Gibbons celebrate on the field after winning Game 5 over the Texas Rangers in Toronto on Oct. 14, 2015. (The Canadian Press/Nathan Denette)
Baseball

Team, fans put through the wringer in return to playoff baseball
By Rahul Vaidyanath

Playoff baseball is something so very special and after waiting 22 years for its return to Canada, the Toronto Blue Jays and its nation of fans experienced just about everything a team could in its five-game roller-coaster win over the Texas Rangers.

For starters, the Jays became only the third team in MLB history to come back after losing the first two games at home to win a best-of-five series.

The Jays came back in Game 5 on Wednesday at Rogers Centre in a 53-minute seventh inning from a controversial 3–2 deficit—courtesy of the correct interpretation of an obscure rule—to take a 6–3 lead off Jose Bautista’s three-run homer.

“I’ve seen Jose do that all year,” manager John Gibbons told Fox Sports after the game. “He has the knack of doing something big at the right time.”

Bautista called it “the most emotionally charged game I’ve ever played,” in an on-field interview with Fox Sports after the game.

“Words can’t describe the feelings that are inside me right now,” said Russell Martin, whose controversial error in the seventh gave Texas the lead.

The Jays have given Canadian sports fans a team to unite around, and for both team and fans, battling adversity drew them together even more, enabling them to achieve bigger things or realize greater joy.

After losing the first two games, the Jays admitted a better team had beaten them. That they ended the regular season losing four out of five games—for the first time since early July—probably didn’t help either.

“They outplayed us both games,” said Gibbons on Friday, Oct. 9. “They outlasted us,” he said referring to the tough 14-inning loss in Game 2. The longer a game goes, the more painful it is to lose and Game 2 was the longest playoff game in franchise history.

What could have gone wrong for the Jays was going wrong. Pitching ace David Price was impeccable since joining Toronto (9–1 record), but he took the loss in Game 1, after 10 days rest.

Words can’t describe the feelings that are inside me right now.
— Russell Martin, Toronto Blue Jays

In Game 2, the Jays lost their best reliever Brett Cecil to a calf muscle tear on what seemed like an innocent run-down play. MVP candidate Josh Donaldson took Rougned Odor’s knee to the head and had to come out of the ballgame to undergo concussion tests. Bautista also came out of the ballgame with leg injury later on.

Much has been made of the Jays offense—leading the league in scoring and having the “Big 3” of Donaldson, Bautista, and Edwin Encarnacion combining for 120 homers. Along with power-hitting shortstop Troy Tulowitzki, after the first two games, those four sluggers were hitting .143.

The Jays didn’t get any help from the umpires either with Odor being called safe at second base despite replays appearing to show his right foot temporarily off the bag as Tulowitzki maintained his tag. That was a crucial call and, of course, he turned into the game-winning run.

The comeback started in Texas thanks to Marco Estrada, who was being understandably given second-tier billing after Price and Marcus Stroman, but nevertheless, had been terrific with the second lowest ERA in the AL since the All-Star break at 2.78.

Winning Game 3 was about gradually getting back to what made the Blue Jays a great team. It wasn’t easy as the Texas infield turned four double plays to keep the game within reach.

In the sixth, after the fourth double play prevented a run from scoring in a bases-loaded, no-out situation, Tulowitzki broke the game open and ended his 0-for-11 slump with a three-run homer.

He said after the game, “I’m still battling.” His left shoulder area was heavily wrapped up during his press conference after his early return from injury.

“Tulo needed that. He really did,” said Gibbons. The Jays needed it— big time.

The Jays seemed to be more patient with the bat in Game 3 and it paid dividends.

Gibbons’ managerial capabilities were tested in Game 4. He made the unpopular decision to pull starter R.A. Dickey after 4-and-2/3 innings despite having a six-run lead in favour of Price.

He joked that it was “not a relationship building move,” but knowing how Kansas City came back from a four-run deficit in the eighth inning of its Game 4 against Houston earlier in the day, “Gibby” wasn’t taking any chances.

The 40-year-old Dickey who had become the oldest pitcher to get his first playoff start spoke about not wanting to come out due his—and anybody’s in a similar situation—competitive nature, but putting the team ahead of individual accolades is what’s most important.

“We have a bunch of selfless guys on the team,” Dickey said.

The Blue Jays, as a team, continued to get back to their usual selves in Game 4. They jumped all over Texas starter Derek Holland, hitting three homers in the first two innings.

Blue Jays baseball is rare among Canadian sports in that one network broadcasts all the games and one announcing team—Buck Martinez and Pat Tabler—calls all the games.

Instead, for the most anticipated Blue Jays baseball in a generation, Canadian baseball fans had to deal with the first two games being played during work hours and not being called by Buck and Pat’s familiar voices.

On top of that, Canadians were justifiably irritated with Fox Sports colour commentator Harold Reynolds’ ignorance when he said, “Because not a lot of Canadians grew up playing baseball, they’re not used to catching balls in the stands.”

Good thing for Reynolds he’s not tuned into social media. He apologized to Canadians on Sportsnet the following day. However, aside from that incident, his rambling commentary was widely panned by Blue Jays fans on Twitter.

Not one to shy away from a verbal jousting, Toronto city councillor Norm Kelly tweeted, “Canadians expect an apology from Harold Reynolds, @FOXSports. Or do you guys stand by his ignorant comments?”

Despite these annoyances, an average of 4.17 million Canadians watched some part of Game 3, making it Sportsnet’s most watched broadcast.

The fans went through the range of emotions in Game 5, expressing their disgust at how the Rangers took the lead in the seventh, but in the end Bautista and company rewarded their loyalty with the victory and a trip to the ALCS.

The wild ride goes on.