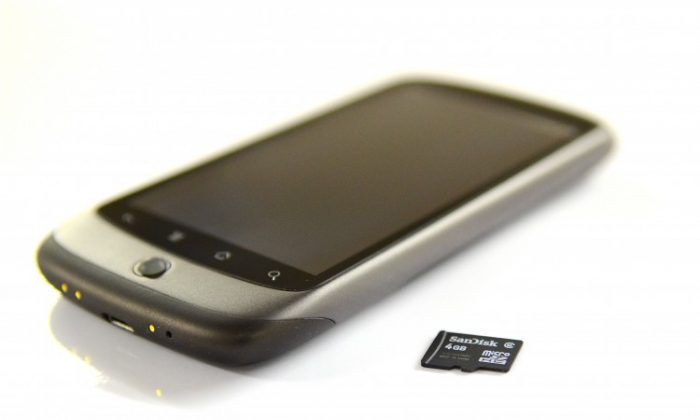 MicroSD cards are used to extend the memory of many mobile devices, including cell phones, used to play music. (Matthew Little/Epoch Times)
US

PARLIAMENT HILL—The government carried through Wednesday on previously announced plans to block any new levies being put on microSD memory cards commonly used in cellphones to store music, pictures, and other information.

New regulations will preempt a review of a levy plan being considered by the Copyright Board of Canada.

The move was promptly denounced by a group that distributes the levies to content creators whose work is often copied without compensation.

“Our Government is committed to building a strong and vibrant Canadian digital economy and the widespread adoption of digital technology is the foundation upon which it will be built,” said Minister Christian Paradis in a Nov. 7 statement announcing the move.

“To extend a levy to one of the technologies that underpins this increased engagement, adoption, and growth just does not make sense.”

The move was welcomed by the Retail Council of Canada, which has lobbied for years to keep the private copying levy from being extended from soon-to-be extinct audiotapes and CDs to the next-generation digital storage devices and media players.

Under the current private copying levy regime, manufacturers and exporters must pay levies, as set by the Copyright Board, on sales of blank audio recording media that are not destined for export.

Research in Motion and other device manufacturers and retailers have been concerned the levy would raise the price of devices and prompt Canadians to shop south of the border.

However, according to the Canadian Private Copying Collective (CPCC), Paradis’s decision to block a proposed new private copying levy on microSD memory cards before it could be considered by the Copyright Board is an example of inappropriate interference.

“Not only is this an unprecedented end-run around the fair and independent Copyright Board process which was established to deal with these kinds of issues in the first place, but to hand down a regulation like this with no consultation period adds insult to injury,” said CPCC Chair Lyette Bouchard.

The CPCC is a non-profit group that oversees the copying levy on sales of blank media used to copy music, such as CD-Rs.

The organization then distributes the money to songwriters, recording artists, and other rights holders to compensate them for private copies made of their music.

The group said that not extending the levy will hurt these content creators and rights holders in Canada.