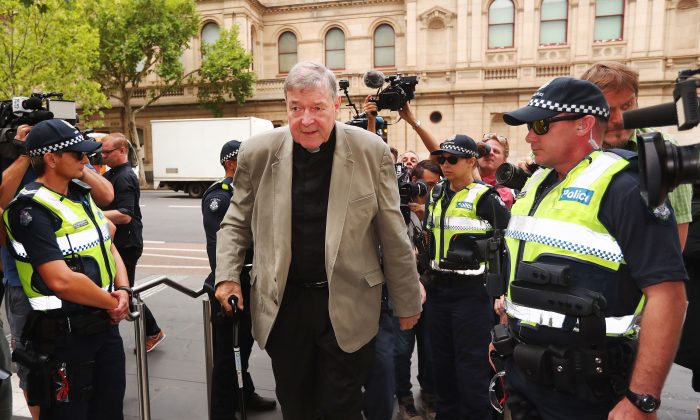 Cardinal George Pell, one of the highest-ranking Vatican officials and a former top adviser to Pope Francis, was found guilty in an Australian court on five charges of child sexual offenses. The verdict is an embarrassment to the Vatican as it was revealed just days after a global summit in Rome dedicated to preventing sexual abuse.

Pell, 77, was found guilty of offenses committed over two decades ago against then-13-year-old boys. The conviction was made public on Feb. 26, after a court suppression order on the trial was lifted, following a second abuse case against Pell. Those child sex offenses ended up being dropped by the prosecution.

The cardinal’s lawyers said that they would appeal the verdict, which followed days after the major summit where some 190 senior Catholic bishops and religious superiors attended. Pell has been the most senior Catholic clergyman internationally to be convicted for child sex offenses. He pleaded not guilty to all five charges.

The Vatican, in their first response to the conviction, said that it was “painful” for many but insisted that the Pell had the right to “defend himself until last level” of the judicial process, citing his proclaims of innocence.

Pell was first found guilty by a jury on Dec. 11 last year, following a 4-week trial in the Country Court of Victoria in Melbourne, Australia. He was convicted of committing five sexual offenses against two 13-year-old choir boys in the priests’ sacristy of St. Patrick’s Cathedral in Melbourne, where Pell was archbishop at the time. One of the two victims died in 2014.

Each of the five offenses carries a maximum of 10 years in jail. Pell’s lawyers have filed an appeal against three grounds of the verdict, which could lead to a retrial if successful. Pell remains on bail and is due to return to court for the start of his sentencing hearing on Feb. 27.

Vatican spokesman Alessandro Gisotti told reporters that Pope Francis “confirmed” measures prohibiting Pell from practicing his ministry in public and from having contact with minors “in any way or form.” Francis had removed Pell from his group of close advisers in December, without any comment on the trial.

The verdict comes as the Catholic Church struggles to deal with a mounting child sexual abuse crisis where scandals have rocked the United States, Chile, Germany, Ireland, Australia, and more.

Francis closed the four-day summit on Feb. 24, describing it as an “all-out battle” against the sexual abuse of minors. But he failed to offer any concrete plans that would hold bishops accountable—aside from offering some rough guidelines.

Many of the abuse survivors who made the long trip to Rome and other advocates reacted in frustration after Francis made no mention of a “zero tolerance” approach to pedophile priests and those who cover up such acts.

A number of victim advocates told The Epoch Times previously that the summit was all talk and expressed disappointment that there were no concrete policy changes.

During the summit, German Cardinal Reinhard Marx confirmed the existence of coverups and said the church destroyed documents to conceal sexual abuse cases, as he called for more “traceability.” Marx said the rights of the victims were “effectively trampled underfoot.”