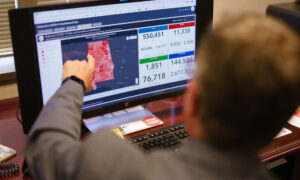 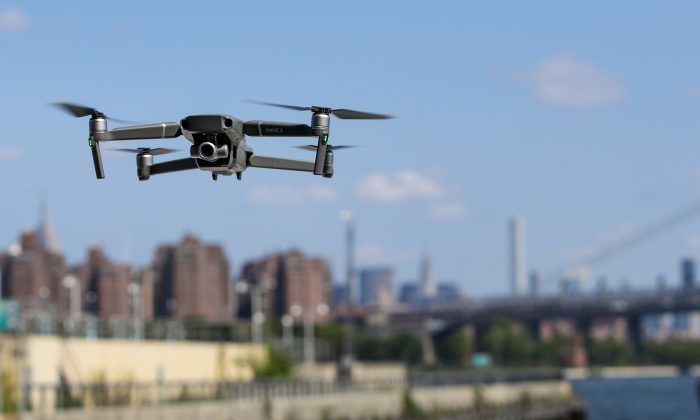 A drone flies during a product launch event at the Brooklyn Navy Yard in New York, on Aug, 23, 2018. (Drew Angerer/Getty Images)
US News

Top officials from the Department of Homeland Security (DHS) and the Department of Justice (DOJ) are warning Congress to modernize obsolete federal laws to help curb the increasing threat of drone attacks from terrorists or drug cartels.

DHS Secretary Kirstjen Nielsen said in a statement that new legislation must be passed immediately. The DHS is hoping to gain more legal powers to stop any future attacks.

“The threat from drones is real & it’s here,” Nielsen wrote on Twitter Sept. 26. “Outdated laws prevent us from setting up defenses we need to protect events, federal facilities, and other targets from airborne threats. I urge Congress to pass bipartisan legislation giving @DHSgov authority to keep Americans safe.”

In a speech earlier this month, Nielsen warned that malicious drones are now “a major national security concern in our homeland.” She said criminals can spy on sensitive facilities and disrupt communications, or steal data.

The proposal, dubbed the “Preventing Emerging Threats Act of 2018,”  gained strong support from the Trump administration.

“The bill would provide DHS and DOJ the specific authority to develop, test, and deploy within the United States counter-UAS technology to mitigate the threat posed by careless, threatening, or malicious drone operations,” White House press secretary Sarah Sanders said in June.

Terrorist groups such as ISIS have in their possession grenade-launching and mortar-dropping drones, as well as flying decoys, according to Defense One. ISIS deploys a number of drones that can be bought online but mostly uses quadcopters for surveillance or explosive-dropping purposes.

“If you want to move people, narcotics, God-forbid weapons of mass destruction, or anything else over the border, you have a surveillance location that can be now automated with drones at a very inexpensive cost by organizations outside of the United States,” Glawe told CBS News.

A prime example of such an attack happened in August when explosive-laden drones detonated close to where Venezuelan President Nicolas Maduro was speaking; Maduro and top officials managed to escape unharmed.

Attorney General Jeff Sessions has also supported legislation that would counter drone threats. In a Sept. 25 statement, he called for Congress to pass the Preventing Emerging Threats Act.

“This new tool [drones] can also be used to wreak havoc by criminals, terrorists and other bad actors” Sessions said. “That is why the Trump administration has worked on legal reforms to enable law-abiding people to use this technology for good, while protecting them from those who would use it for ill.”

The McCaul proposal, which was approved by a Senate committee, has been bogged down as civil-liberties organizations say it could infringe on citizens’ rights.

Federal agents currently aren’t allowed to shoot down a drone. They can only track it and try to catch it when it lands.

“There are drones now that have the ability to carry up to 300 pounds, if not more of a payload. So that is a significant risk for law enforcement officers and agents in this country,” Karisch said.