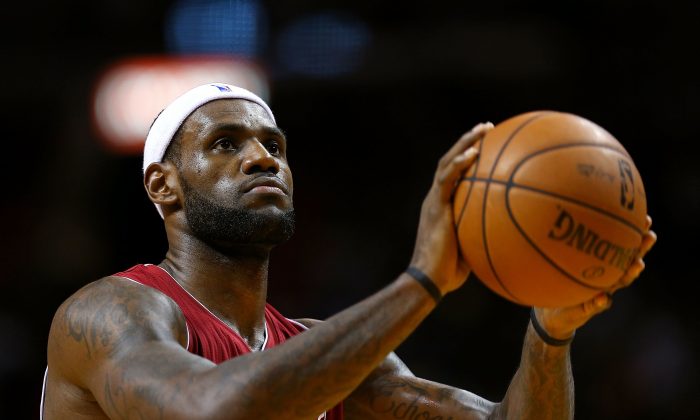 LeBron James #6 of the Miami Heat shoots a foul shot during a game against the Phoenix Suns at American Airlines Arena on November 25, 2013 in Miami, Florida. (Mike Ehrmann/Getty Images)
NBA

Who are the best players in the NBA? Well, number one, LeBron James, is pretty obvious and in a tier all by himself. But where do the others fall? Here we’ll rank them.

The criteria for ranking them is this: Who would you want for the rest of this season to give you the best chance at winning a championship? In ranking these fine players, the criterion used is based on past performance to predict this season’s estimated production. In addition, a tier-based system will be used to describe the level of impact of each player while showing how close they are to others.

Tier 1: Top 5 all-time great in the prime of his career.

James has been the best basketball player on the planet for about six years and he has won four out of the last five MVP awards. This is a tier that we normally don’t get to see. Passing, shooting, driving, rebounding, defense and everything else; James simply plays every aspect of the game at an elite level.

Durant has been the second best basketball player in the world for about 3 years and he’s been getting better every year. Born with an unbelievable combination of size and agility, Durant can shoot and score from anywhere. His defense and ball handling have improved significantly. Shoot, score, repeat

Paul is the best playmaker and floor general in the league. Ultra-competitive, strong and tough; he creates scoring opportunities by passing and dribbling the ball into tiny cracks and crevices that no one else sees. Surrounded by new offensive weapons this year, Paul is going to lead the league in assists by a wide margin.

Both of these players have a shot at winning this year’s MVP award if LeBron falters at all and they can guide their respective teams to the best record.

The league has never seen a better combination of rebounding and shooting than Kevin Love. A giant bear of a man, Love possesses a soft, feathery touch both around the basket and out past the three-point line. Underneath the basket Love is an immovable object that sucks in all available rebounds like a black hole.

Everyone who plays basketball has a favorite place to shoot from on the floor. Curry’s is the size of a lake. Last year he set a record for most three-point shots made in a season. He gets his shots off even though everyone knows what’s coming because he hits his shots from all angles, on the move and off balance like no one ever has. His dribbling and play-making are also highly-developed and underrated. Curry is the most exciting and fun player to watch in the entire league. Hopefully, his ankles hold up long enough for us to watch him become the greatest shooter the NBA has ever seen.

Watch him hit 11 threes here in one game against the Knicks:

If you liked that watch all of his record breaking 272 three-pointers on the season:

Hibbert is a controversial pick in this position and people think of Dwight Howard as the best center in the league. However, if you’re going to build a championship caliber defense, your first priority is finding a way to protect the rim. Ever since last year’s playoffs, Hibbert has been the best rim protector in the league. You may say, “There is not a stat for that.” But now there is. Since the NBA has purchased tracking cameras for every arena we now know what percentage teams shoot around the rim when a certain player is within five feet and Hibbert is dominating this territory.

In addition, Hibbert has passed Howard overall as the best big man in the game. He is currently blocking twice as many shots per game as Howard and his team is giving up almost 15 points less per 100 possessions when he is on the floor compared to Howard. Howard also hurts his team with his poor free throw shooting (55%) because opposing teams can halt the Rocket’s whole offense by intentionally fouling Howard. You can’t do that with Hibbert because he shoots over 70% on his free throws. Starting last year in the playoffs, Hibbert has taken the title of the best center in the game.

7. Russell Westbrook Key Stats: Points per game 20.9 Assists per game 5.5 Steals per game 1.9 Westbrook is not quite himself yet as he works his way back from the injury he suffered in last year’s playoffs. Ironically it was that injury that showed all of his doubters just how valuable Westbrook is to the Thunder. Without his relentless attacking aggression with the ball, his team’s whole offense became Kevin Durant going one-on-one. Westbrook uses speed, athleticism and heart to maul his team to victory.

Indiana’s do-it-all forward showed that he belonged on this list last year in the playoffs as he led his team past Carmelo Anthony’s Knicks and went toe-to-toe for seven games against LeBron James. Like James, George does a little bit of everything on offense or defense. He does a little bit of whatever it takes for his team to win and they are on their way to the number one seed in the East. If he can lead his team deep into the playoffs or beyond he has a chance to move up a few more spots on this list.

Parker conducts the Spurs symphonic offense like no other maestro. Perpetually underrated, Parker performs his craft night after night and year after year. Every year it looks like the Spurs are on their way down and every year they ride right back to the top of the standings with Parker driving the bus. Oh, and how about this shot in last year’s finals?

Tier 5 Not Quite Championship Material

This position is a tough call but I’m leaning a little on history and assuming that Anthony can bring his Knicks back into the middle of the playoff pack in the East. Anthony plays such a beautiful individual game on offense but it never results in an elite team. It seems that no matter how well Anthony scores the basketball, like the rest of the players in this tier, he is just not quite championship material as the leader of a team.

Anthony Davis: Has to get his team into playoff position. He is going to be a staple on this list for many years to come.

Blake Griffin: Plays as hard as anyone. He needs to be more effective on defense and more consistent from mid-range and the free throw line.

Dwayne Wade: Is still great when his knees allow it.

Al Horford: Could be the second best player on a championship team when he escapes the mediocre Hawks.

James Harden: Loses style points for flailing into defenders to draw fouls and does not play enough defense.

Brooke Lopez: Is gifted but lost in the Nets malaise.

Michael Courter
Follow
Michael Courter has a master’s degree in Social Work with distinction from California State University Chico and is certified in Parent Child Interaction Therapy. He has been treating individuals and families since 2006.