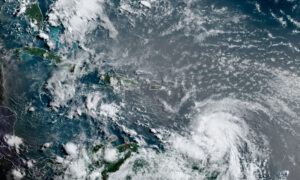 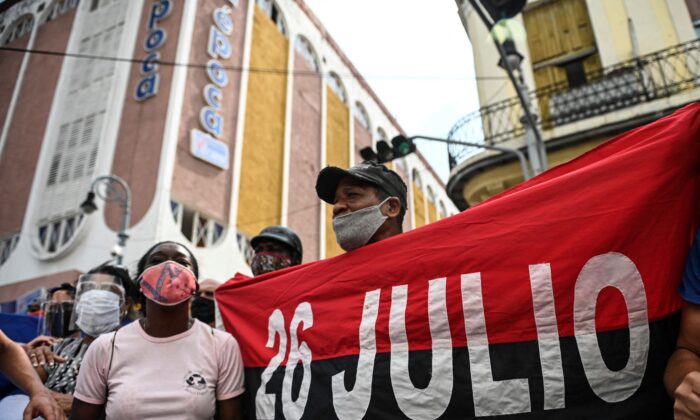 People take part in a demonstration against the communist regime of Cuban President Miguel Diaz-Canel in Havana, on July 11, 2021. (Yamil Lage/AFP via Getty Images)
Republicans

Several Republicans over the weekend accused the Biden administration and Twitter of attempting to minimize demonstrations in Cuba against the communist regime, arguing that they will use recent statements by White House officials against them while campaigning in southern Florida.

Thousands of Cubans were seen taking to the streets in a rare protest against the regime, demanding “freedom,” “liberty,” and more—with some even carrying the American flag.

Julie Chung, the acting Assistant Secretary for U.S. Department of State’s Bureau of Western Hemisphere Affairs, wrote that the protests were primarily focused on the CCP (Chinese Communist Party) virus pandemic, although the tweet wasn’t signed off with her initials.

“Peaceful protests are growing in #Cuba as the Cuban people exercise their right to peaceful assembly to express concern about rising COVID cases/deaths & medicine shortages,” Chung wrote on Twitter. “We commend the numerous efforts of the Cuban people mobilizing donations to help neighbors in need.”

Christian Ziegler, Vice Chairman of the Florida Republican Party, said Chung’s response was an attempt to mischaracterize what the demonstrations were about, arguing they were against the Cuban communist regime.

Ziegler told Chung on Twitter: “Well… I will be adding this gem into my GOP stump speeches across Florida. May even need to print it out when I visit Southeast Florida. They were already heading this way, but Democrats just ceded Florida for the foreseeable future.”

Southern Florida has a significant Cuban diaspora, with many having arrived in the United States during mass exoduses from the island nation over the past several decades.

“Cuban-Americans across S.E. Florida are nervous for their family & friends, but also celebrating them for rising up AGAINST Communism and FOR Freedom,” Ziegler added in a tweet. “Hey Joe – The American flags carried in protests across Cuba represent FREEDOM, not COVID.”

“People in Cuba are protesting 62 years of socialism, lies, tyranny & misery not ‘expressing concern about rising COVID cases/deaths,’ Rubio wrote. “Why is it so hard for @potus & the people in his administration to say that?”

Meanwhile, White House national security adviser Jake Sullivan wrote on Twitter that the administration “supports freedom of expression and assembly across Cuba, and would strongly condemn any violence or targeting of peaceful protesters who are exercising their universal rights.”

“We stand by the Cuban people’s right for peaceful assembly,” she posted. “We call for calm and condemn any violence.”

The protests erupted amid Cuba’s worst economic crisis since the fall of the Soviet Union, its old ally, and a record surge in coronavirus infections, with people voicing anger over shortages of basic goods, restrictions on civil liberties, and the authorities’ handling of the pandemic, according to reports.

Thousands took to the streets in various parts of Havana including the historic center, their shouts of “Diaz-Canel step down,” referring to the leader.