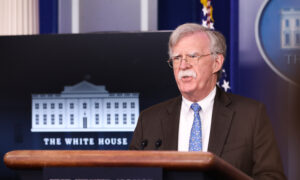 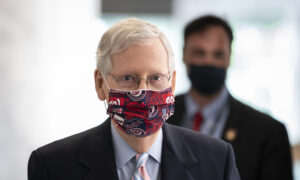 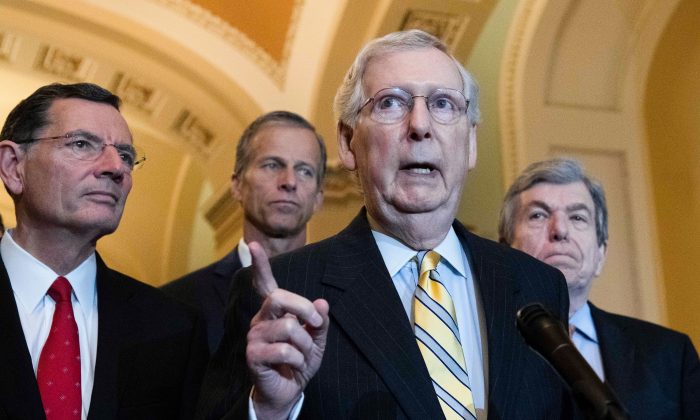 Top Senate Republicans criticized House Speaker Nancy Pelosi (D-Calif.) and Democrats for not dropping their list of unrelated provisions in the next pandemic relief package, including additional unemployment benefits of $600 a month.

“Democrats have to realize that they’re going to have to start working for the American people and quit playing politics with this. We heard, I think it was a whip, Hoyer of the Democrat House, that said, maybe a week 10 days ago that there was plenty of room to compromise below 600. We haven’t seen any of that movement on the part of Pelosi and Schumer at this point,” said Grassley.

House Majority Leader Steny Hoyer (D-Md.) said in a statement on July 31, “I continue to call on Senate Republicans to work with the House to extend enhanced unemployment assistance, provide much-needed relief to state and local governments dealing with COVID-19, and protect Americans from evictions. While negotiations continue, the House will stand ready to do its job again, as it did when we passed the HEROES Act on May 15.”

While the White House and Republicans are pushing for lowering the added unemployment of $600 a month or getting rid of it altogether, Pelosi, the top negotiator for the other side, said she needs money for state and local governments, added unemployment benefits, and food aid.

Sen. Mitch McConnell (R-Ky.) took to Twitter Tuesday to accuse Democrats of holding up the next relief package with unrelated provisions.

“Speaker Pelosi is still holding up this entire package over bizarre unrelated things like carveouts for the marijuana industry. She even claimed to the press that pot is a proven COVID-19 therapy! I hope she’s shared this breakthrough with Dr. Fauci. Can we get serious yet?”

McConnell was referring to a comment that Speaker Pelosi made during a press conference where she was asked about the cannabis provision in the bill.

“I don’t agree with you that cannabis is not related to this. This is a therapy that has proven successful,” Pelosi told reporters.

Meanwhile, Conference Chairman Sen. John Barrasso (R-Wy.) said, “The best thing we can do is get Americans back to work. And young people back to school. Not what Nancy Pelosi is talking about in handout heaven—giving lots of money to things completely unrelated to coronavirus.”

At the same time, the Senate Republican Communication Center (SRCC) accused Senate Minority Leader Chuck Schumer (D-N.Y.) of using the state and local tax (SALT, a deduction which allows taxpayers of high-tax states to deduct local tax payments on their federal tax returns) to give breaks to the wealthy.

“Schumer is insisting on massive tax cuts for rich people in blue states as a precondition for allowing any more relief to pass. Not a dime more for anybody who’s struggling in America unless he gets to satisfy his SALT obsession—94 percent would go to people making [more than] $200,000 a year,” said the SRCC.

Grassley said there was enough in the House and Senate versions of the relief bill that should enable lawmakers to move forward but said the added unemployment benefits are causing an impasse.

“And that’s a shame because you know there are so many things between the Pelosi bill and the Senate bill that, that we put down a week ago, that is similar. And so, there’s a lot that can be agreed to. There’s no reason, one or two things could be holding this up from moving ahead,” Grassley added.