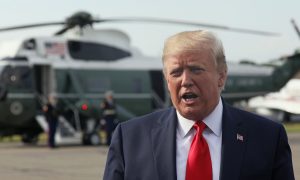 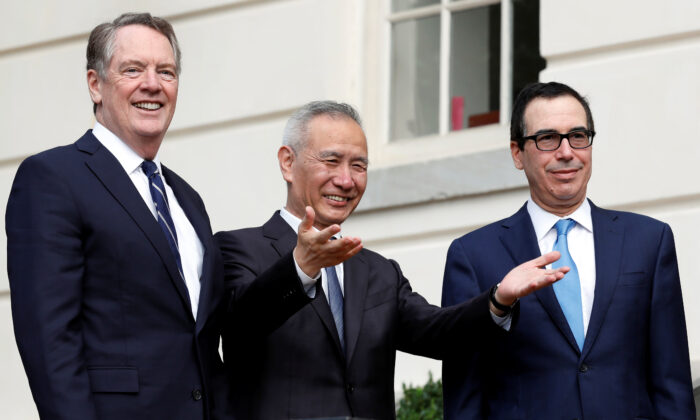 WASHINGTON—The United States’ and China’s top trade negotiators met on Oct. 10 for the first time since late July to try to find a way out of a 15-month trade war.

U.S. Treasury Secretary Steven Mnuchin and U.S. Trade Representative Robert Lighthizer greeted Chinese Vice Premier Liu He on the steps of the USTR office before a meeting in which they will seek to narrow differences enough to avoid a scheduled Oct. 15 tariff rate increase on $250 billion worth of Chinese goods.

President Donald Trump said on Thursday he will meet with Vice Premier Liu He at the White House on Friday, the second of two-days of high-level U.S. China trade talks aimed at averting scheduled increases in U.S. tariffs on Chinese goods.

“Big day of negotiations with China. They want to make a deal, but do I? I meet with the Vice Premier tomorrow at The White House,” Trump said on Twitter.

If negotiations break down again, by Dec. 15, nearly all Chinese goods imports into the United States—more than $500 billion—could be subject to punitive tariffs in the dispute that erupted during U.S. President Donald Trump’s time in office.

Commerce Secretary Wilbur Ross said in Sydney on Thursday that the tariffs were working, forcing Beijing to pay attention to U.S. concerns about its trade practices.

“We do not love tariffs—in fact we would prefer not to use them—but after years of discussions and no action, tariffs are finally forcing China to pay attention to our concerns,” Ross said in remarks prepared for delivery on an official visit to Australia.

Although some media reports suggested both sides are considering an “interim” deal that would suspend planned further U.S. tariffs in exchange for additional purchases of American farm products, Trump has repeatedly dismissed this idea, insisting that he wants a “big deal” with Beijing that addresses core intellectual property issues.

Speaking to reporters in Washington on Wednesday, Trump said: “If we can make a deal, we’re going to make a deal, there’s a really good chance.”

“In my opinion China wants to make a deal more than I do,” Trump added.

The two sides have been at loggerheads over U.S. demands that China improve protections of American intellectual property, end cyber theft and the forced transfer of technology to Chinese firms, curb industrial subsidies and increase U.S. companies’ access to largely closed Chinese markets.