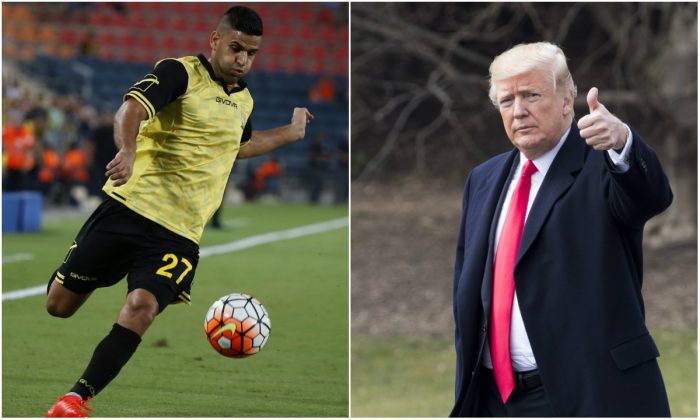 One of the oldest and most well-known Israeli soccer clubs, Beitar Jerusalem, has decided to add the president’s name to its own—the American president’s, that is.

The club is honoring President Donald Trump’s decision to move the U.S. embassy in Israel from Tel Aviv to Jerusalem by adding “Trump” to its name.

“For 70 years has Jerusalem been awaiting international recognition, until President Donald Trump, in a courageous move, recognized Jerusalem as the eternal capital of Israel,” the club said in a statement. “President Trump has shown courage, and true love of the Israeli people and their capital, and these days other countries are following his lead in giving Jerusalem its rightful status.”

Last year, Trump became the first world leader to announce the relocation of an embassy to Jerusalem, Israel’s official capital. The embassy opened on Monday, May 14.

Beitar Jerusalem leadership, owner Eli Tabib, and executive manager Eli Ohana, “have decided to add to the club’s title the name of the American President who made history, and from now on will be called Beitar Trump Jerusalem,” the club stated. “We have the greatest love for the President, and it will win.”

Israel Hayom reported the club hasn’t yet formally asked the local soccer authorities for a name change. There are also some limitations on name changes, so the chairmen of the club will have to justify their decision to the local Football Association.

Posters thanking Trump for the move have sprung up in the country.

The Mikdash Educational Center, a nonprofit, announced that it will release 1,000 coins featuring a profile of Trump together with King Cyrus, the ancient Persian ruler who allowed the Jews to return to Jerusalem 2,500 years ago. The coins are to celebrate the 70th anniversary of Israel’s independence.

For decades, world leaders located their embassies in Tel Aviv to assuage Palestinians.

Palestinians seek to claim East Jerusalem as the capital of a state they want to establish. Israel regards all of the city, including the eastern sector it annexed in the 1967 Six-Day War, as its “eternal and indivisible capital.”

U.S. ambassador to Israel David Friedman gave a speech at the beginning of the inaugural ceremony, attended by a U.S. delegation from Washington and Israeli leaders.

Trump did not attend the opening ceremony but sent a recorded video message. Treasury Secretary Steven Mnuchin and White House Advisor Ivanka Trump unveiled the seal of the United States.

Since Trump’s announcement, at least 10 other countries announced their intention to move their embassies to Jerusalem, according to The Times of Israel.

Despite the Palestinian protests, White House senior adviser Jared Kushner put forth a vision for a mutually beneficial peace agreement in the Israeli-Palestinian conflict. Kushner is the U.S. envoy to the Middle East and President Donald Trump’s son-in-law.

“We believe, it is possible for both sides to gain more than they give—so that all people can live in peace—safe from danger, free from fear, and able to pursue their dreams,” Kushner said.

“Jerusalem must remain a city that brings people of all faiths together,” he Kushner added. “While presidents before him have backed down from their pledge to move the American Embassy once they were in office, this president delivered. Because when President Trump makes a promise, he keeps it.”