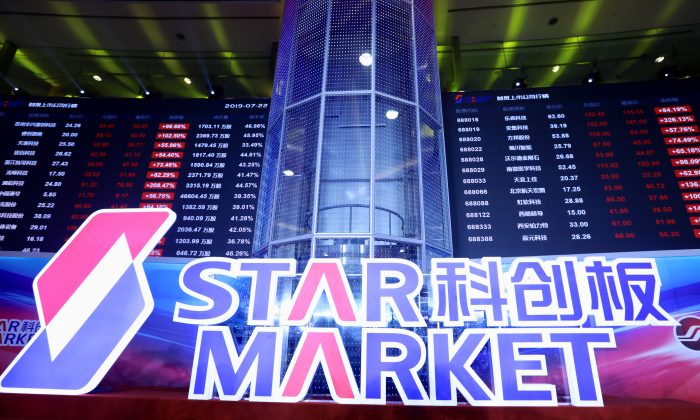 A sign for STAR Market, China's new Nasdaq-style tech board, is seen after the listing ceremony of the first batch of companies at Shanghai Stock Exchange (SSE) in Shanghai, China on July 22, 2019. (Reuters)
China Business & Economy

All but four companies of the 25 stocks listed on the market fell as investors took profits from opening day gains, erasing about 9 percent of the total market capitalization.

The new board roared out of the gates on Monday, with some shares surging as much as 520 percent. Frenzied buying more than doubled the board’s total capitalization from 225 billion yuan to 529 billion by the end of the day.

While the size of the moves on day two paled in comparison, the declines were sharp enough for STAR’s five biggest individual shareholders, including Monday’s newly minted billionaires, to lose a combined 6.94 billion yuan on paper, according to Reuters calculations, though none lost claims to three-comma fortunes.

Falls were led by China Railway Signal & Communication Corp, which sank 18.4 percent, the sharpest drop of the day.

But even after that drop, its shares were 71 percent higher than their initial public offer price.

Yuan Yuwei, fund manager at Olympus Hedge Fund Investments Co, said that STAR Market valuations could remain frothy in the short term, but that he expected to see more declines over the next two to four weeks.

“This is a serious bubble,” he said. “Valuations don’t support fundamentals. Frothy valuations benefit big shareholders but retail investors will be burnt.”

Yuan said he hoped regulators would not overly interfere with trading and let market forces play their role. The board is operated by the Shanghai Stock Exchange.

Created to echo the tech-heavy Nasdaq, the STAR Market is intended to be both a driver of capital market reforms, including a U.S.-style IPO system, and a way to promote home-grown technology companies amid a damaging trade war with the United States.

To give market forces a greater role in setting prices, trading rules are looser than other Chinese markets. There are no daily price limits in the first five days of trade in new stocks.

But some major investors have advised caution, especially in the early going.

“Although the STAR Market serves as strategic deployment for national financial reform, it will still experience rounds of market volatility and irrationality in the early stages,” Lynda Zhou, China equities chief investment officer and portfolio manager at Fidelity International said in an emailed note.

“Even institutional investors need to remain calm and return to the fundamentals of investment,” she said.

The market’s debut, which saw stocks post average gains of 140 percent, exceeded even the expectations of veteran traders who are used to wild swings in the country’s biggest stock markets.

Margin lending data for Tuesday was not yet available.

There is no index at present for tracking the STAR Market, but the Shanghai Stock Exchange said it will launch one on the board’s 11th trading day, following the debut of its 30th company.

By Andrew Galbraith and Samuel Shen