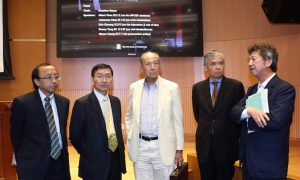 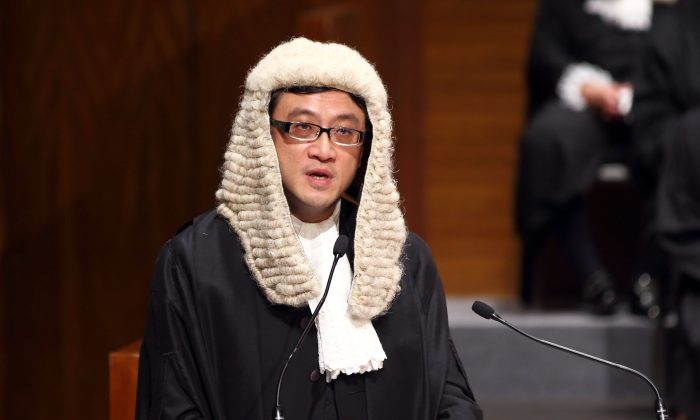 Key members of Hong Kong’s legal community said Monday that the rule of law cannot be abused for political purposes. Protesters seeking an exception for civil disobedience and the city’s administration must both adhere to the law’s dictates, they said.

At the ceremonial opening of the legal year at Hong Kong’s City Hall, Chief Justice Geoffrey Ma said that the “administration of justice by the courts is not, nor can it be, influenced in the slightest by extraneous factors such as politics or political considerations.”

“The courts and judges apply only the law,” said Ma.

Meanwhile, Hongkongers have “overwhelmingly” respected the rule of law before and after a nearly three-month long street protest, affirming the “pivotal position” of the rule of law in Hong Kong, Ma notes.

Protesters have called their pro-democracy activism the “Umbrella Movement” as opposed to a regime-changing “color revolution.” The demonstrations drew hundreds of thousands of supporters at their peak and remained largely peaceful and nonviolent.

Overemphasis on the obey the law aspect of rule of law is the hallmark of a regime, which is keen to use the law as a tool to constrain the governed.
— Paul Shieh, outgoing president of the Hong Kong Bar

Justice Secretary Rimsky Yuen, who is part of the administration of Chief Executive Leung Chun-ying, assessed the effect of the protesters on the rule of law in Hong Kong differently than the chief justice.

Yuen said Monday that the Occupy protests are a “blatant challenge” to the rule of law.

Where the chief justice saw Hongkonger’s overwhelmingly respecting the rule of law after the demonstrations ended, Yuen said, further “unlawful activities … would only do further harm to our community.”

Yuen also dismissed claims by key protest figures that the government is using the courts as a tool for “political persecution.”

People were convicted by the court after due process, and the judiciary kept to the law and evidence when passing judgments, Yuen explained.

Hong Kong’s legal system, which follows the British common law tradition and retained an independent judiciary after the former colony was returned to mainland China in 1997, has come under scrutiny during the Occupy protests. Notably, protesters and the legal community questioned the courts’ decision to award private transportation companies emergency injunction orders to clear protest sites.

Paul Shieh, the outgoing chairman of the Hong Kong Bar Association (HKBA), thinks that the Hong Kong government, the Chinese communist regime, and pro-democracy protesters all do not properly understand the rule of law and judicial independence.

“It is time for the independent Bar to offer a more balanced view,” said Shieh in his farewell speech.

The Senior Counsel says that the Hong Kong government has in recent years become used to prefacing “almost every description of what it does by the phrase ‘according to the law’,” something he finds “comical” but “misleading.”

Shieh also criticized a controversial White Paper issued by the Standing Committee of the National People’s Congress (NPCSC)—the Chinese regime’s faux legislature—in June 2014 which called Hong Kong judges “administrators” who had to be “patriotic” in a White Paper.

Hong Kong’s judges have to perform “judicial tasks independently,” said Shieh, and the Chinese regime should not “paternalistically issue edicts for judges to perform political tasks,” something that “may be commonplace on the mainland” but “inappropriate” in the semiautonomous city.

In fact, Hong Kong’s Law Society removed their president in August for supporting the White Paper.

The pro-democracy activists too did not escape Shieh’s censure.

Shieh pointed out that judges who ruled against the government were “hailed as heroes” by protesters, but when judgments went in the opposite direction, they would make “insinuations” about the “‘demise’ of the rule of law,” a clear case of “double standards.”

Further, while pro-democracy protesters seemed to occupy moral high ground because of the NPCSC Aug. 31 decision—Hong Kong’s top leader will be elected universal suffrage but Beijing retains the final say—and “police misconduct,” they cannot therefore use the “wrongs” as an excuse to “legitimize” their lengthy street occupation, which Shieh felt had “overstepped legitimate limits” of a civil disobedience movement.

Likewise, the Hong Kong government should not have glossed over the “deficiencies of the NPCSC decision and the underlying discontent by repeating the official classification that the (Umbrella) Movement was ‘unlawful.'”

Hong Kong’s current political crisis, Shieh argues, can “only be solved with enlightenment and political wisdom by all parties concerned.”