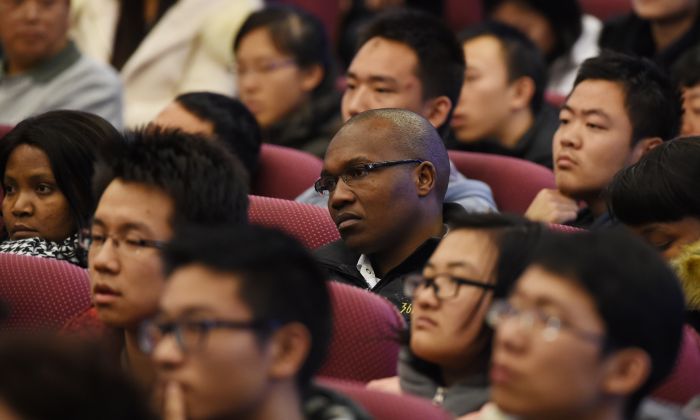 One of China’s top universities has recently drawn controversy over a “buddy program” for exchange students that overwhelmingly assigned female Chinese students to partner up with male foreign students.

The program run by eastern China’s Shandong University requires three local “study partners” to be assigned to every foreign student, to help them with their studies and facilitate cultural exchange.

However, alleged buddy allocations leaked online showed that most of the buddies were female while most of the foreign students were male, prompting angry responses from Chinese netizens who questioned the appropriateness of such an arrangement.

The university started its buddy program for foreign students in 2016, according to the school’s website. While the program previously assigned one buddy to each exchange student, it changed the ratio to three-to-one last year.

The allocation of buddies is reportedly posted on the university’s ethernet, which requires a log-in to access.

On July 6, a Chinese netizen Shaheshang posted on Weibo, China’s Twitter-like platform, screenshots of the buddy list for the 2017/18 academic year. The list, which included the students’ gender, showed that the overwhelming majority of the Chinese buddies were female, while most of the foreign students were male.

Foreign students are also asked in the program’s registration form to choose whether they want heterosexual students to be their buddies.

Shandong University, in a statement on July 7, defended the program, saying it was “in line with the spirit of the Education Ministry, which encourages the communication between Chinese and foreign students.”

The revelation attracted a storm of online criticism, with many netizens questioning the motive behind assigning females to male exchange students.

“Which country supplies three buddies for Chinese students? Where else can foreign students receive this kind of service?” Netizen Xiaopangmao wrote on Weibo on July 7.

Chinese lawyer Yu Yang said on Weibo on July 7: “The university pairs young girls … some of whom may have never even dated, with foreign male students as buddies. What exactly is the school wanting to do?”

Other netizens expressed shock at the development.

Luwan Bojue said on Weibo on July 11: “Shandong University is a good school. [I can’t believe] it do this kind of ugly things.”

“It looks true. My friends who are from Shandong University complained about this buddy program seriously. It’s very bad,” Netizen YinHangye Xiaozhiyuan said.

Another user Yunzhong Manbu said: “The university can receive a subsidy [from the central government] for each foreign student. It’s all about the money.”

Shandong University, in a statement on July 12, apologized for “inappropriate” items on the registration form such as the question asking if the exchange student wanted a heterosexual buddy.

“The purpose of the program is helping Chinese and foreign students improve their studies and learn each other’s culture by studying together,” the statement added.

“There is no instance of one male foreign student being assigned three female Chinese students as buddies.”

Meanwhile, it was also revealed by Chinese media that the university arranged 25 Chinese students to serve as personal assistants to a student from Zimbabwe who broke his leg in an accident in 2018.

The reports refer to May 2018 post on the university’s website, which has since been removed, seeking volunteers to assist the student.

The post said volunteers should be “dedicated to helping,” “full of compassion,” “obey arrangements,” and “responsible and diligent.”

According to an April 2018 report by Chinese state-run media Xinhua, the Chinese regime supplies full scholarships to students from countries participating in the Belt and Road initiative, a massive infrastructure program aimed at expanding China’s global influence.

The treatment of foreign students contrasts with that of local students, who are mostly left to foot their tuition and living expenses themselves. Typically less than 10 percent of local students are awarded scholarships, which tend to range between 3,000 yuan ($437) to 10,000 yuan ($1,450) a year.

In 2018, a video titled “One Country, Two Dorms” went viral on Chinese social media. The video compares the dorms and living situations of six Chinese students and six foreign students.

The free accommodation for the foreign students were spacious, furnished and included appliances. In contrast, in local students’ dorms, six or seven people shared a room that contained limited furniture and almost no appliances.

“Their [Chinese] government has somehow neglected them,” the video said.

“Their dormitories are old, the rooms small, their rules are many and strict, like limited hot water and electricity, curfew, and much more.”