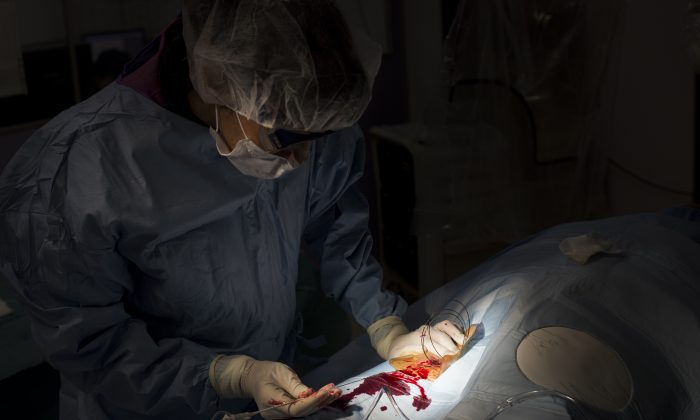 A doctor operates a patient in this file photo. (FRED DUFOUR/AFP/Getty Images)
China

A medical journal has retracted a disputed study on liver transplantation co-authored by a Chinese doctor implicated in forced organ harvesting of prisoners of conscience, a move that acknowledges concerns over the Chinese regime’s murky transplantation system and may spur other journal editors to enforce stricter ethical guidelines, according to researchers.

The disputed study, published in the journal Liver International in October 2016, analyzed 564 liver transplants at Zhejiang University’s First Affiliated Hospital from April 2010 to October 2014. Co-author Dr. Zheng Shusen and 16 other academics claimed in the paper that no organs were taken from executed prisoners.

But the “no executed prisoners” claim was almost certainly made up, say ethicists.

In a letter to the journal editor published on Jan. 30, clinical ethicist Wendy Rogers of Macquarie University in Australia, writing with two co-authors, provided two primary reasons for this assertion. First, the Chinese regime’s barebones organ donation system did not even claim to have ceased the use of prisoner organs during the period in question; secondly, the “donated” organs very likely include those from “volunteer” executed prisoners.

Liver International editor-in-chief Mario Mondelli of University of Pavia, Italy, told Science Magazine that Zheng Shusen and another co-author first responded to the dispute in an email that “all organs were recovered from donors after cardiac death and no grafts obtained from executed prisoners were used”—a claim lifted word-for-word from their original study.

After receiving a forceful rejoinder from Rogers and her colleagues, Mondelli then requested that Zheng submit an official document by Feb. 3 as proof that no organs from executed prisoners were used. He received no response. Mondelli told Science Magazine that the disputed study, related correspondence, and a retraction statement will be published in their forthcoming print issue, and that the study’s authors will receive a “life-long embargo” from submitting papers to the journal.

Retractions of papers from journals are uncommon in the world of academic publishing, and typically only take place when serious problems have been identified. Last year, Rogers and others protested a paper in the Journal of Medical Ethics for its “sanitized” and “very positive” account of the Chinese regime’s ban on using organs from executed prisoners. The journal, however, issued a lengthy caveat rather than withdraw the piece.

The recent retraction is significant because it “sends a strong message that journals will not accept without challenge claims that organs were procured ethically, and that they will follow through with sanctions if ethical guidelines are breached,” Rogers said in an email. “I hope that other journals publishing Chinese data will take note of this and be extra cautious when dealing with papers on data from organ transplants.”

Dr. Torsten Trey, the executive director of Doctors Against Forced Organ Harvesting (DAFOH), a nongovernmental group based in Washington D.C., noted that the retraction “is saying that China’s transplant and research system is not up to international standards.” DAFOH works to expose and stop unethical organ harvesting—an act that Zheng Shusen stands accused of.

Zheng wrote in a paper that he had carried out 46 “emergency” liver transplants between January 2000 to December 2004, a period long before the Chinese regime started accepting organs from volunteer donors. This means that the transplants were performed within one or two days of the patient’s arrival in hospital, indicating that forced donors from a living population of pre-screened individuals were executed on demand. Zheng’s hospital website says that he has been the “leading surgeon” in nearly 2,000 liver transplant surgeries over the years.

Human rights investigators say that Zheng and other Chinese doctors have been able to conduct a large number of organ transplants, on demand, over the years because the Chinese regime systematically harvests the organs of prisoners of conscience. Most of the prisoners of conscience in China today are practitioners of the spiritual discipline Falun Gong, who are subject to a violent campaign of persecution.

Zheng Shusen is not merely a disinterested medical professional, according to official documents. He is also the chairman of the Zhejiang Provincial Anti-Cult Association, a Party-linked agency responsible for directing anti-Falun Gong propaganda and working with the 610 Office, a Gestapo-like organization that oversees the persecution, according to public events he has participated in where he is identified by that title.

Incidentally, one of Zheng’s own public presentations, on Nov. 21, 2015, contradicted the official claims about the cessation of the use of prisoner organs. In it, Zheng provides a graph of the rate of growth of what China claims are ethical, voluntary liver donations (known as donation after cardiac death, or DCD), versus the total number of liver transplants performed. In previous publications, Chinese officials have made clear that the transplants that are not DCD come from the traditional source, i.e. executions.

In the yellow and blue colored bar graph behind Zheng, the rate of supposedly ethically-obtained livers grows at an exponential pace beginning in 2010—from 1 percent to 5, 15, 26, and then 46 percent—an extraordinary achievement. Yet in 2015, at least 10 percent of liver transplants still came from prisoners, the graph shows.

The year 2015 was when Chinese officials promised that no more organs from prisoners would be utilized.