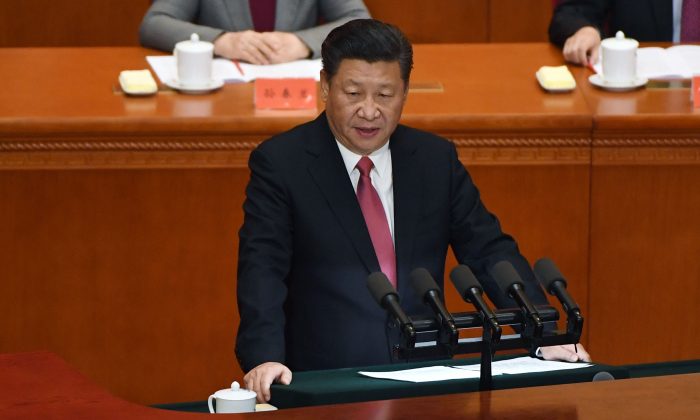 Chinese leader Xi Jinping at the Great Hall of the People in Beijing on Nov. 11, 2016. (Wang Zhao/AFP/Getty Images)
China

Top Chinese Leadership to Reshuffle in 2017

Xi Jinping wants loyalists in his administration, but could face resistance from political rivals
By Larry Ong
Print

A new team of executive officers handpicked by President-elect Donald Trump will join him when he becomes the 45th President of the United States in the White House in January.

Meanwhile, five out of seven members of China’s Politburo Standing Committee, the top decision-making body in the Chinese regime, are set to retire at an important political meeting slated for the second half of 2017. Also stepping down are at least two-fifths of the current Politburo and over half of the 376 elite Chinese officials in the Central Committee.

Chinese leader Xi Jinping will want to bring in loyal replacements to further entrench his anti-corruption campaign. He also appears committed to having the regime abide by its own laws, thus restraining corrupt officials.

But whether Xi will get his men into the top leadership group depends on the progress of consolidating his power over a rival political faction helmed by former Party chief Jiang Zemin.

Jiang Zemin was Party general secretary from 1989 to 2002 and continued to oversee the Chinese regime for the next decade through the loyalists he placed in the administration of his successor, Hu Jintao.

For instance, the military responded slowly to Hu’s instructions to provide emergency rescue in Sichuan when a massive earthquake struck in 2008 because the top generals still took directions from Jiang, as hinted by a retired general staff chief in his account of the rescue operations.

Jiang was able to secure a substantial following from both high- and low-ranking Chinese officials because he turned a blind eye to their corruption and kleptocracy. Ambitious officials also stood to gain if they took active part in Jiang’s initially unpopular persecution of a traditional Chinese spiritual practice.

“You must show your toughness in handling Falun Gong. … It will be your political capital,” Jiang had instructed his staunch loyalist Bo Xilai, according to veteran China journalist Jiang Weiping.

Bo oversaw the gang rape and abuse of female Falun Gong practitioners when he governed Liaoning Province in northeastern China. Liaoning was also the “epicenter” of harvesting Falun Gong organs, wrote American investigative journalist Ethan Gutmann in his 2015 book “The Slaughter.” When Bo later headed the southwestern metropolis Chongqing, the organs of an elderly practitioner were removed without his family’s consent and turned into medical specimens, the police claimed.

If Bo wasn’t investigated for corruption and prosecuted in 2013, he would likely be a Politburo Standing Committee member in Xi’s administration.

Xi has spent four years diminishing Jiang’s faction and influence, and changing what it means to be politically correct.

Xi has forcefully demonstrated that it no longer pays to be corrupt in China. Over 1 million officials have been investigated and disciplined. More than 200 of the purged officials were senior cadres in the government, military, and state-run businesses. Xi’s anti-corruption campaign is very popular with the Chinese people, who often have had to bribe local officials for basic services.

Analysis: Behind Xi Jinping’s ‘Crushing Momentum’ in Cleaning Up Corruption

According to Bill Gertz, a reporter with the Washington Free Beacon, an official with the Obama administration said that Wang Lijun, a former Chongqing vice mayor, revealed “a major power struggle within the senior ranks of the outwardly placid Chinese Communist Party” to American officials when he tried to defect at the U.S. Consulate in Chengdu in 2012. Wang’s former boss Bo and security czar Zhou Yongkang were indeed planning a coup, according to sources inside the Party.

Xi has prodded the regime towards ruling “in accordance with the law” and the constitution. Since May 2015, the regime’s high court and top prosecuting body have to accept all criminal complaints, whereas previously complaints could be rejected without reason. In December 2016, a Chinese court overturned a famous murder conviction that local officials appeared to have blocked legal appeals against for 21 years.

The baby steps of legal reform, however, are easily overlooked, given ongoing abuses, like the arrest of over 300 human rights lawyers in 2015 and 2016, and lengthy jail sentences for peaceful activists. In an earlier interview, Luo Yu, a Chinese defector and son of founding public security head Luo Ruiqing, ascribed the apparent security and legal inconsistencies of Xi’s leadership to the nature of the Chinese Communist Party dictatorship itself, which is inclined to brutality and suppression.

Given the thrust of Xi Jinping’s policies, it seems he wants clean, loyal, and compliant senior officials in the Politburo Standing Committee who would support permanent anti-corruption policies and key legal reforms.

But Xi might not get his way if Jiang Zemin’s faction still has effective bargaining power by the time the Communist Party holds its national congress in the latter half of this year.

Candidates for the Politburo and its Standing Committee are usually nominated by senior leaders and retired Party elders behind closed doors. Political factions within the Party strike bargains and make concessions, the results of which are confirmed at the national congress, which is held every five years.

For example, Xi’s nomination as general secretary at the 2012 national congress is widely held to be a compromise between former Party leaders Hu Jintao (who wanted to nominate his protégé Li Keqiang) and Jiang (who allowed Xi to become Chinese leader in exchange for three Standing Committee spots for his own loyalists.)

So while Xi might now seem to be ascendant—he is the Party’s “core” leader, commander-in-chief of the military, and personally heads about a dozen key policy groups—if Jiang still has sufficient clout, he could install one or even two loyalists to block Xi on the Standing Committee.

Xi will try to at least guarantee a Standing Committee spot for childhood friend and close ally Wang Qishan, a high-level source familiar with discussions in Zhongnanhai told this newspaper in November 2016. Wang, who is past the customary retirement age, could be retained because he “made enormous contributions to eradicating corruption and is hence irreplaceable,” the source said.

Wang could retain his powers, or gain expanded authority, like in heading the new anti-corruption body that the Xi administration is testing in Beijing and two provinces. The body can probe non-Party members and will have oversight of the regime’s law and security apparatus.