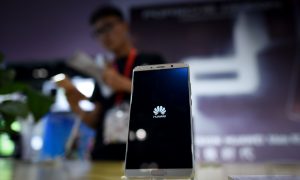 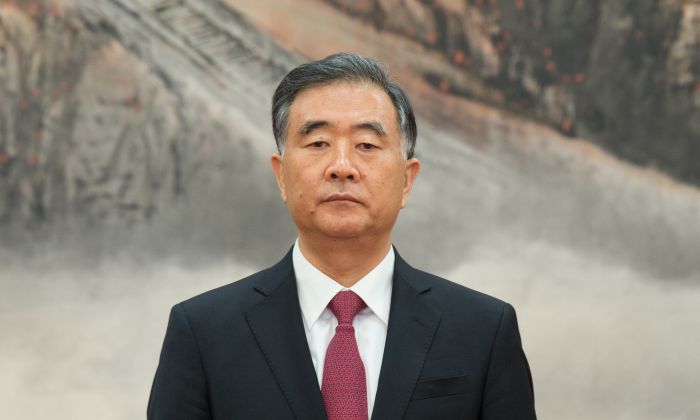 Wang Yang, chairman of National Committee of the Chinese People's Political Consultative Conference, attends the greets the media at the Great Hall of the People in Beijing on Oct. 25, 2017. (Lintao Zhang/Getty Images)
Chinese Regime

A Taiwanese journalist in the delegation revealed that Wang said the United States was pushing China to accelerate its progress on economic reforms, in comments that diverged greatly from the harsh criticisms of the U.S. administration found in recent Chinese state propaganda.

Wang Yang is part of the 7-member Chinese Communist Party’s (CCP) Politburo Standing Committee, the most powerful decision-making body. He is known for holding more liberal views within the Party.

As head of the Chinese People’s Political Consultative Conference (CPPCC), a political advisory body, he is fourth most powerful. Chinese leader Xi Jinping is head of the Politburo Standing Committee.

China Times is a pro-Beijing media outlet in Taiwan. It reported on June 4 that its journalist Huang Zhixian traveled to Beijing with a Taiwan delegation led by Yok Mu-ming and met with Wang Yang recently.

Yok Mu-ming is chairman of the Taiwan New Party, a political party that supports Taiwan’s unification with mainland China. Chinese state-run media Xinhua has even directly stated in a May 29 report that Yok has been promoting the agenda of unifying Taiwan under the CCP for years.

Taiwan is a de-facto independent country with a democratically-elected government; however, China considers the island part of its territory and has repeatedly threatened the use of force to claim sovereignty over Taiwan.

Huang is a television presenter, writer, and political commentator who holds pro-Beijing views.

In the China Times report, Huang recounted that while touring the Great Hall of the People, where the Party often holds major political meetings, Wang told them the U.S.-China trade dispute “will hurt both the United States and China if they fight.”

Wang elaborated that the trade dispute is a new kind of challenge for the CCP, since market reforms were introduced in 1978.

“The Chinese nation will be educated and trained during the process of the U.S.-China trade dispute,” he said, adding that it was “forcing China to innovate.”

For example, the trade dispute has made China realize that it should not rely on foreign technology and develop its own chips and other tech, he said.

Although Wang also criticized the United States, similar to CCP propaganda, he spoke of the trade talks having a positive impact—a viewpoint that has never been mentioned in Chinese state media.

Opening Up vs. Closing Off

In recent weeks, after U.S.-China trade talks broke down and tensions again escalated, two voices have emerged within Chinese media, which are tightly controlled by the Chinese regime. State-run media have run commentaries calling for the country to close itself off and develop its own systems, while some privately-owned media with ties to different CCP factions, have said that China should open its gates.

Even among the Party leadership, their publicly expressed opinions are contradictory. This is highly unusual, as the Chinese regime prioritizes Party unity and having all members be “highly consistent with the Party’s central authorities.”

On May 13, Chinese premier Li Keqiang spoke at an employment conference, where he urged local government authorities to prevent large-scale unemployment by encouraging migrant workers who have lost their urban jobs to keep looking for employment in the city. Migrant workers are often farmers who leave their rural hometowns and move to a metropolis in search of higher, more stable wages.

Nine days later, the CCP mouthpiece People’s Daily published an article titled “Let’s go back home to set up new businesses,” in which it encouraged migrant workers to leave their urban jobs and go back to their hometowns—contrary to Li’s request.

The differing opinions suggest a rift in Party leadership.

Previous media reports have indicated that the Party leadership’s handling of the trade dispute has met with criticism from within.

In August 2018, Reuters reported that Wang Huning, the fifth-most powerful member in the Politburo Standing Committee, and Xi’s ideology chief and strategist, had come under fire for crafting an overly nationalistic image for the country that raised the United States’ alarm.

As head of the Party’s propaganda department, Wang was in charge of the regime’s PR.

“[Wang] is in trouble for mishandling the propaganda and hyping up China too much,” Reuters quoted a source familiar with discussions in Chinese leadership circles as saying.

“Many economists and intellectuals are upset about China’s trade war policies,” according to an anonymous academic at a Chinese policy think tank who spoke to Reuters. “The overarching view is that China’s current stance has been too hard-line and the leadership has clearly misjudged the situation.”

Commentators at independent Chinese-language media such as Chinese-language Epoch Times, Radio Free Asia, and Aboluowang have all noted the openly divergent viewpoints taken by Party leaders since April.

“[This means] orders from Xi Jinping cannot be delivered out of Zhongnanhai [headquarters compound of the CCP in Beijing],” commentator Gao Shan wrote in a May 28 report by the Chinese-language Epoch Times.