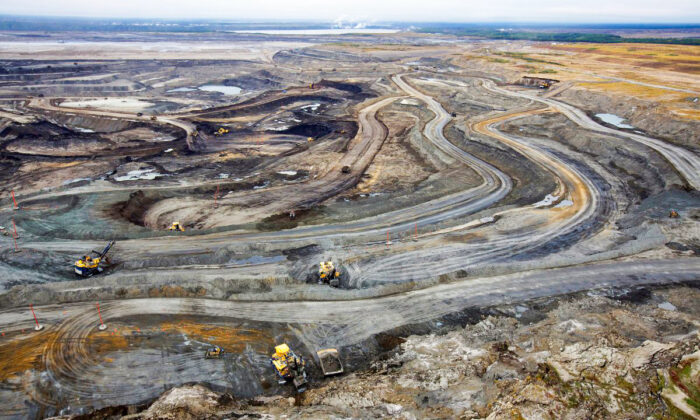 The five largest Canadian banks have doubled their funding for oil sands production and related projects in Canada to $16.8 billion last year, amid a global energy shortage, according a April 11 report by the Financial Times.

This is despite the five leading Canadian banks’ agreement last year to join the U.N.’s Net-Zero Banking Alliance, led by Mark Carney, a former governor of the Bank of Canada and the Bank of England, in favor of eliminating greenhouse emissions by 2050, by implementing green friendly policies into their operations and investment portfolios.

Oil sands are a large part of the Canadian economy and is mainly located in the province of Alberta, which contains the bulk of domestic energy production.

Major Canadian lenders, including the Royal Bank of Canada, Toronto-Dominion Bank, Scotiabank, the Bank of Montreal, and the Canadian Imperial Bank of Commerce, have upped their funding for the 30 top oil sands production companies and six key oil sands pipeline companies, by increasing their lending in 2021 by nearly $9 billion, according to an alliance of environmental groups, which sent its report to FT.

Sixty banks worldwide in the report have raised their financing into Canadian oil sands projects by 51 percent between 2020 and 2021, to $23.3 billion, with as as much as $742 billion in fossil fuel financing worldwide in 2021 alone.

RBC, Scotiabank and TD were among the twelve biggest investors in oil sands financing last year.

“This trio, plus Bank of Montreal and CIBC, all increased their fossil fuel financing from 2020 to 2021,” said the environmentalist report.

The rise in oil sand investments, which is one of the world’s major sources of fuel, comes at a time when the banking industry is facing growing pressure from activists and investors to help reduce the burning of fossil fuels to battle U.N. predictions of “catastrophic” climate change, despite the energy shortfalls facing current outputs from renewable energy technologies outside of nuclear, although research and development for new technologies continue.

According to FT, RBC, CIBC, and Scotiabank fought off shareholder proposals last week that called for stricter climate policies, while TD and BMO faced similar protests at their annual meetings this week.

RBC told FT it was committed to achieving net zero, but it wants to follow a responsible path that also secures Canada’s energy supplies and protects the growth of the economy.

Scotiabank said it was still working to help clients transition and said that the report was flawed by not taking into account how the financing is being used, or the sustainability and transition plans of the recipients.

Five of the six important global financiers of oil sands since the Paris Climate Agreement are Canadian.

JP Morgan Chase, which is American, was another of the five top oil sands financiers, with $10.879 billion.

The Business Council of Canada said in 2020 that Canadian oil sands “are best positioned to lead the energy transformation.”

In the wake of a post-pandemic economy and with a war in Ukraine, which is causing global energy supply disruptions worldwide, it seems that oil sands will continue to be a lucrative investment that meets energy needs in the foreseeable future.