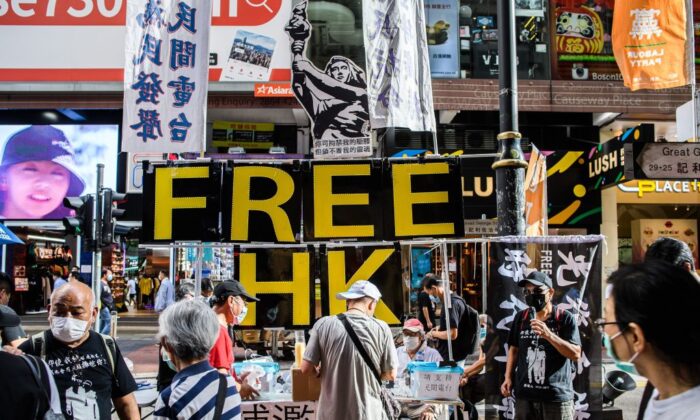 A large display showing the Goddess of Democracy (top C) and lettering that reads 'Free HK' is seen a stall on a pavement near Victoria Park in Hong Kong on June 4, 2020, after an annual vigil that traditionally takes place in the park to mark the 1989 Tiananmen Square crackdown was banned on public health grounds because of the coronavirus pandemic. (Anthony Wallace /AFP via Getty Images)
HK Current Affairs

The recent speech of Beijing’s highest-level official in charge of Hong Kong affairs signals that the Chinese regime may be planning on revising the city’s election law to support pro-China candidates. Critics are concerned that his move could rule out candidates from the pro-democracy camp, and that Beijing will pass new election rules to tighten its grip over Hong Kong.

Xia Baolong, director of the Hong Kong and Macau Affairs Office (HKMAO), delivered a speech on “patriots ruling Hong Kong” on Feb. 22, stating that Hong Kong should be governed by “patriots,” according to mainland Chinese media outlets.

Xia borrowed the term “patriots governing Hong Kong” from former Chinese leader Deng Xiaoping who put it out in the 1980s with regards to the city’s “one country, two systems” framework. Deng said that patriots should be the main body to govern Hong Kong—”Hong Kong people ruling Hong Kong.”

According to Deng, “patriots” abide by three standards: “respect one’s own nation, sincerely support the motherland to resume the exercise of sovereignty over Hong Kong, and not harm Hong Kong.”

Xia’s criteria for patriotism are stricter than Deng’s standards, according to Radio Free Asia (RFA).

In his speech, Xia stressed that the election in Hong Kong should prevent “anti-China individuals in Hong Kong” and “political agents of international anti-China forces from entering Hong Kong’s political organs.” He also emphasized that “improving the electoral system must be carried out under Beijing’s leadership” and that Hong Kong “must never simply copy or apply foreign election systems.”

RFA also reported that Xia’s speech indicates that Beijing plans to change Hong Kong’s election law in order to eliminate the possibility of a potential candidate from the pro-democracy camp to be elected before the election of the Legislative Council in September and the election of the Chief Executive’s Election Committee in December this year.

It is expected that Beijing will formally propose specific measures during the “Two Sessions,” the main annual political gathering of China’s political elite, which will start on March 4, the report said. China’s rubber-stamp legislature—the National People’s Congress— and its advisory body—the Chinese People’s Political Consultative Conference—will convene to enact policies and agendas. More than 5,000 delegates from around the country typically participate.

According to pro-Beijing media HK01, a new Hong Kong electoral system would include the establishment of a “candidate patriot review mechanism” to ensure that “all candidates are patriots.” In other words, candidates would be pre-screened to ensure that they are pro-China.

Hong Kong politician Fergus Leung, a member of the Central and Western District Council, told RFA that the democrats have a slim chance of taking part in future elections.

RFA quoted Leung as saying, “They will come up with more reasons to prevent those Hong Kong people who support democracy and freedom from participating in politics. Therefore, I think that regardless of whether there is a Legislative Council election this year, the chances of democratic camp to get in any election are very slim.”

Leung, along with other pro-democracy activists, former lawmakers, and politicians, were arrested in January for their roles in a primary election held by the pan-democracy camp ahead of the Legislative Council (LegCo) elections in September last year. The primary election was organized by local political association Power for Democracy, with the aim of selecting the most promising pro-democracy candidates to run for legislative office. Leung was one of the candidates. It was the largest mass arrest so far since the national security law went into effect on June 30, 2020. Leung was released soon after the arrest.

Leung told RFA that he did not plan to run for legislative office because he does not have any faith in Hong Kong’s electoral system.