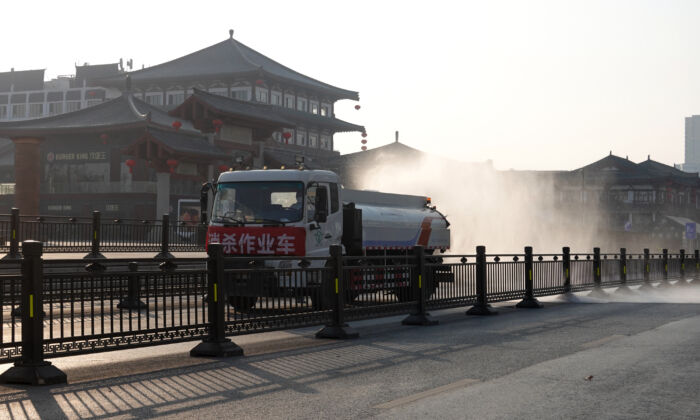 A truck sprays disinfectant on street in Xi'an in China's northern Shaanxi Province, amid a COVID-19 lockdown, on Dec. 31, 2021. (STR/AFP via Getty Images)
INSIDE CHINA

Despite the censored and controlled information and media, many Chinese reports from the city of Xi’an, the new epicenter, give hints about the tragedies that are taking place.

Three migrant workers risked their lives in hazardous weather conditions and getting caught by police for breaking the containment policy, and took their individual journeys to flee Xi’an.

The expensive quarantine charges and deadly isolation measures forced them to climb mountains, run on a shared bike, or swim in freezing cold water. In the end, they were all caught by the police.

They had the same destination: their hometowns.

The Chinese migrant workers don’t share any social status in the city. They had no house, no money, and no job when the city imposed the strictest containment measure. Going home was their only hope. Under totalitarian governance, their freedom of movement is forbidden.

A netizen commented: The closure of the city means an abrupt and painful survival mode of daily life for city dwellers; to the migrants with no permanent housing and no money, it’s the end of the world. What are better ways than to flee the city?

Xi’an resident Sun Hui asked to be quarantined outside his home because he had a fever for days, and bled from his nose and mouth. Previously, his coworkers at the office had been confirmed infected and he suspected that he was also infected with the virus.

But the official never responded to his request. After his wife was confirmed infected and all six members of the family tested positive, he was finally “removed” from home with the help of his community chat group five days later.

A netizen commented: Those who asked to be isolated could not get it; those who should not have been isolated were forced to do so. It’s outrageous!

3. A Relay of Free Grocery Delivery

Local pandemic prevention workers formed a short distance relay on the streets of Xi’an. On Dec. 31, 2021, “Xi’an Live,” a Chinese social media Weibo account, released a video recording of a team of 28 workers in full protection suits spread out on a sidewalk of half of a block to hand-deliver bags of food to a nearby apartment building.

Each person was within an arm’s reach of the next person. The video said that it’s “free groceries distributed by the government.”

The video went viral on the Chinese Internet and attracted more than 27,000 comments condemning the so-called “effort” of the government.

A netizen commented: You know there’s something that’s called a “wheel.” Stop torturing those who are trying to do their job.

4. Man Dies After Being Rejected by 3 Hospitals

A 39-year-old man, Li Hai (pseudonym), died on the last day of 2021, a Chinese media reported. A Xi’an hospital stated that it was “sudden death, aortic dissection.”

Four hours before his death, Li had sudden chest tightness. He tried to call the emergency hotline, but the line never went through. He called a friend to help make the call, but was notified that the hospital would not admit him without a negative nucleic acid test result within 48 hours when the line finally went through.

On the way to the hospital, he did the test and was confirmed negative. The ambulance drove him to two hospitals, only to find both were closed because of the pandemic. The third hospital refused to accept him due to lack of facilities. When the ambulance finally arrived at a hospital 4 miles away, he had no signs of breathing or heartbeat. After more than 1.5 hours of resuscitation, he was pronounced dead.

A netizen commented: In this ridiculous city, a death is not a death if it’s not from the virus. When society claims success in “zero-COVID,” Xi’an’s government wins.

5. Beaten for Going out to Buy Steamed Buns

On Jan. 1, an online video recorded how a man in white clothes with a bag of steamed buns was attacked by a group of people by the gate of a community apartment. A man in black seemed to snatch his cell phone from behind and an immediate attack followed.

In the video, someone was heard saying, “Do you want to die?” while the beating was taking place. The man’s steamed buns were scattered on the ground.

A netizen commented: Even the most minute power will always get maximized. Look at them, they treat ordinary people like dirt.

On the evening of New Year’s Day, a pregnant woman lost her baby because a hospital rejected her on the grounds that her nucleic acid test result had just expired four hours prior.

She was kept outside the hospital with abdominal pain for more than two hours when it was sub-zero degrees. The hospital finally admitted her into the ER when she was bleeding heavily after 10 p.m., but the fetus had died.

A netizen commented: Even a screenwriter can’t come up with such a tragedy. This is not about fighting the pandemic, this is killing in disguise!

At noon on Jan. 2, a woman’s father had a heartache, so she sought help from local hospitals. The on-call doctor agreed to treat her father, but hospital security rejected her because they came from the medium risk region, despite having proof of a negative test.

She called the police hotline (110), which claimed it’s not within their service category; she called the first-aid ambulance (120), it took a very long time to finally get through, and then she was informed it would take time to arrange an ambulance. The waiting time was uncertain.

During the city’s lockdown, no civilian vehicles are allowed on the street; she went onto the street to finally find a police car driving by, but the police said it’s not within his duty; finally, an enthusiastic netizen helped to locate a hospital that would receive patients, but it was already 10:11 p.m., and eight hours had gone by since her father was complaining of heartache.

In the hospital, she was forbidden to go inside because only one family member was allowed into the hospital during the pandemic.

On the phone, the doctor informed her that it’s too late, nothing was going to help her father. She could hear her mother’s crying on the other end of the phone. She begged security to let her in because her father was dying, but she was turned down, while still trying to comfort her mother who was inside the hospital that the doctor was doing his best to save her father.

She tried to fight her way in, until someone approached her and said they would need permission from the leader. She was finally allowed to go in 10 minutes later. But her father never got to see her for the last time.

She said on her Weibo post: “I rarely call him dad, it’s always: ‘did you eat?’ ‘got you some tea leaves,’ or ‘bought you some clothes.’ But that night, I was crying out loud and calling him ‘daddy’ the whole time.”

A netizen commented: It’s terrible when one’s life doesn’t get the due respect and the protection he deserves. Why would the 110 say that’s not their job? That’s what we’ve been told since we were young that 110 is what to call for help. This is what we get?

Xi’an launched another round of city-wide nucleic acid tests on Jan. 4, but it also experienced another collapse of the QR code check-in system needed for the test, according to a local report. The system showed only the date and time, but the test result was not available.

A netizen commented: The brain of the Xi’an leaders doesn’t really work, but their system is good at collapsing.

9. Brushing Butter on Fences to Prevent Residents from Climbing Over

Local news on Jan. 5 reported how local pandemic prevention personnel in a community brushed butter on fences to prevent residents from climbing over.

In a video, the worker explained while doing his job, “Why brush butter on? Those who try to climb over at night will quit doing it when they grab the fence, since we can’t see them at night.”

The news drew many viewers’ comments. While some agreed with it, others questioned if the measures helped to resolve problems during the city lockdown, and criticized the community management as bad and vicious.

A netizen’s comment: Don’t just butter it. Why not get electrical wire, just like Auschwitz, to get a job well done! You guys are not good at delivering food to people who are isolated at home, but good at engaging in crooked activities.

A recording was taking place while community staff were delivering vegetables to local residents in Xi’an. In the video, a resident was receiving a bag of veggies from two men in protective suits.

A netizen commented: Without completing the whole act, don’t even think about getting the free food.