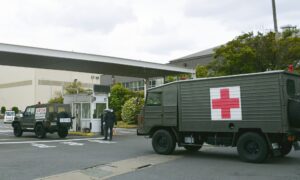 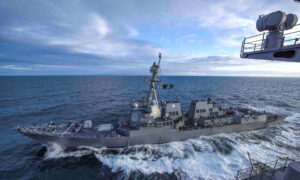 Second Navy Ship Hit With Outbreak at Sea, Heading Back to Port
0 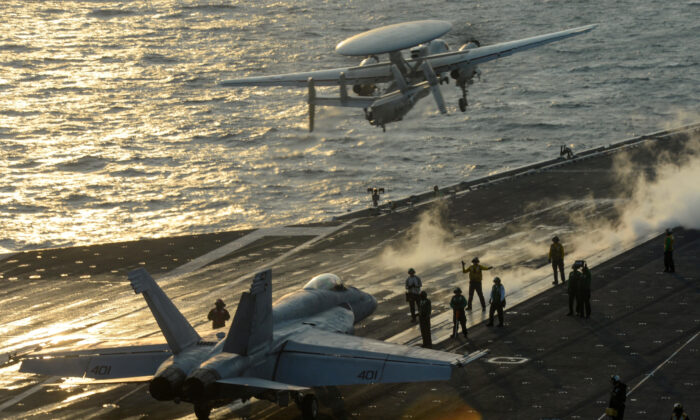 An F/A-18E Super Hornet lines up on a catapult on the flight deck while an E-2D Hawkeye takes off from the U.S. Navy aircraft carrier USS Harry S. Truman in the Arabian Sea, on Jan.11, 2020. (U.S. Navy/Mass Communication Specialist Seaman Apprentice Isaac Esposito/File Photo/Handout/Reuters)
AMERICA

Too Risky to Come Home, Crew of ‘Clean’ US Warship in CCP Virus Limbo

WASHINGTON—On any given day, the U.S. aircraft carrier Harry S. Truman can be found off the Atlantic coast of the United States, probably somewhere between Virginia and Florida. Its crew would love to come home to their families. But they can’t. They’re just too valuable right now.

That’s because the Truman is a “clean” ship, free from the CCP (Chinese Communist Party) virus thanks to a longer-than-expected deployment at sea that started in November. The deployment has kept its battle-ready 4,500 crew out of reach of a pandemic that is wreaking havoc elsewhere in the Navy.

Captain Kavon “Hak” Hakimzadeh and members of his crew described to Reuters in exclusive interviews the mixed emotions of being so close to home, but too precious to pull into port, as the Truman settles into a pandemic-driven operational limbo.

“This is a really weird situation for us,” Hakimzadeh told Reuters by phone, the only way to speak to anyone on board given a ban on visitors.

The crew members interviewed said they understood why the Truman needed to remain offshore to ensure combat readiness. The CCP virus ripped through another carrier, the Theodore Roosevelt, infecting more than 1,100 sailors.

The hope is that once the Nimitz aircraft carrier strike group is up and running, the Truman can finally come home. But with the CCP virus proving dangerous and the world being unpredictable, the Navy doesn’t want to put a date on the Truman’s return.

Being so close to home is a constant reminder for sailors of the strain on their families in the United States, where in just months CCP virus-related deaths have reached at least 62,800, surpassing the number of Americans killed in the Vietnam War.

For Lieutenant Elise Luers, a 28-year-old helicopter pilot, her mind wanders to a family friend who died and a brother-in-law who works at a hospital treating CCP virus patients. She also worries about her wedding plans in October.

“It’s absolutely frustrating. There’s absolutely anxiety and stress, not knowing when we’re going home,” she told Reuters, adding “it’s nothing we can’t handle.” She and others say they are proud to serve and have learned to expect the unexpected.

The U.S. Navy boasts that it draws the kind of people who want to run toward danger, while keeping their families safe back home. It’s the kind of thinking that has become deeply embedded in the military since the Sept. 11, 2001 attacks that led to the war in Afghanistan.

But the CCP virus is upending those instincts since home is where the danger is most acute.

“The emotional toll of wanting to get home, to be on the front lines (against the CCP virus) and protect our families is a tough one,” Hakimzadeh said.

In a world awash with dark Hollywood dramas, one television show that’s been popular among the Truman crew is “The Last Ship.” It imagined a U.S. Navy destroyer that was at sea, in radio silence, when a deadly pandemic devastated the world.

Senior Chief Petty Officer Kevin Dublynn said one of his shipmates had mentioned it to him.

Steven Kane, the TV show’s co-creator and executive producer, said the 2014-2018 TNT drama explored how ill-intentioned people could exploit a pandemic and how easily a CCP virus could wipe out a ship.

Kane acknowledged that readiness was crucial “but my heart breaks for the families and the sailors who are stuck now just off the coast.”

The Pentagon has been trying to warn adversaries that ships such as the Truman are by no means the exception and the U.S. military remains ready for war despite the pandemic. “The U.S. Navy has 90 ships at sea on watch for the American people,” U.S. Defense Secretary Mark Esper said on Twitter.

In some ways, the Truman is perhaps one of the world’s biggest quarantine bubbles. Beyond an increased pace of disinfections on board, the ship’s day-to-day activities are much the same as before the pandemic—no testing, no six-feet of space between sailors, according to crew members.

Every entry onto the ship carries risk, so the Truman has stopped everything but essential resupply flights, and under tight controls.

“The biggest threat is always going to be from people coming on board,” said Commander Veronica Bigornia, the Truman’s senior medical officer.

Once the Truman does come home, its crew risk infection and cannot be presumed to be clear of the CCP virus, requiring lots of testing and quarantines.

U.S. officials told Reuters that more than two dozen warships have counted CCP virus infections among their crews while at port.

After 22 years in the Navy, Dublynn from Brooklyn, N.Y., is used to being the family hero. But now, he says his attention is on his brother, who is a nurse at Coney Island Hospital.

While at sea, some crew have lost family to the CCP virus while others have seen their personal lives at home upended.

The Truman’s deployment itself has already been full of surprises.

Its departure was delayed until November because of electrical troubles. Then it steamed to the Middle East as tensions with Iran soared.

“Every time it looked like it was time to kind of head back home, tensions flared up a little bit,” Captain Hakimzadeh said.

Petty Officer Second Class Justin Dallarosa, 34, recalled the roller coaster of emotions breaking the news to his wife on April 13 that they would be coming home later than expected. He has two daughters, both under three. The youngest will turn one in May.

Still, like other members of the crew, he takes comfort in knowing his family is provided for during economic uncertainty.

“I’ve got some friends back home who lost their jobs with COVID,” he said. “My family is taken care of.”

By Phil Stewart and Idrees Ali