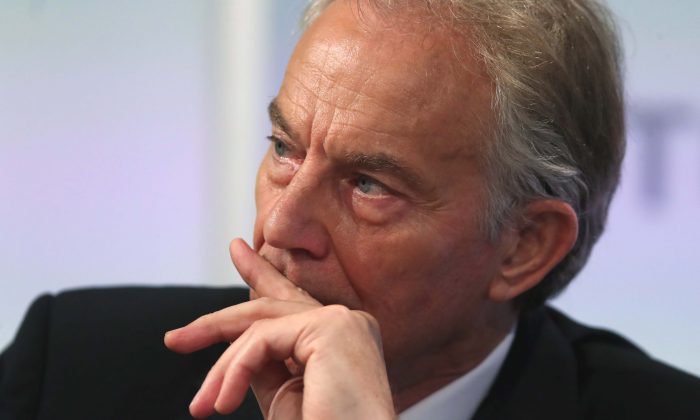 LONDON—Former British Prime Minister Tony Blair said a second Brexit referendum is now the most likely outcome because the UK’s plans to leave the European Union face deadlock in Parliament.

Less than four months before Britain is due to leave the EU, Prime Minister Theresa May called off a parliamentary vote on her deal with Brussels after admitting it would be heavily defeated.

May’s attempt to win assurances from European leaders on her Brexit deal was cast at home as a humiliating failure after EU lawmakers rebuffed pleas for fresh concessions on the so-called Northern Irish backstop.

“Our present situation is unique in modern British politics,” Blair said in a speech in London. “The government is not in control—not of the agenda, not of the events, and not of the outcome.

“What seemed a few months ago unlikely is now above the 50-percent likelihood,” he added. “We will go back to the people.”

Addressing EU leaders in Brussels, Blair said they should offer to reform to make it more attractive for Britain to remain, including making changes to immigration rules, a key driver behind the vote to leave the bloc.

An offer by the EU to change would show “that the political leadership of Europe and Britain had listened to the underlying concerns of those who voted [for] Brexit, not disrespecting the concerns but meeting them in a way which is not damaging.”

Blair has repeatedly called for reversing Brexit since the 2016 referendum, echoing other critics, including French President Emmanuel Macron, who have suggested Britain could still change its mind.

The former prime minister, who won three general elections for Labour, remains a deeply divisive figure in Britain for joining the United States in the Iraq conflict in 2003, after the invasion was found to be based on flawed intelligence.